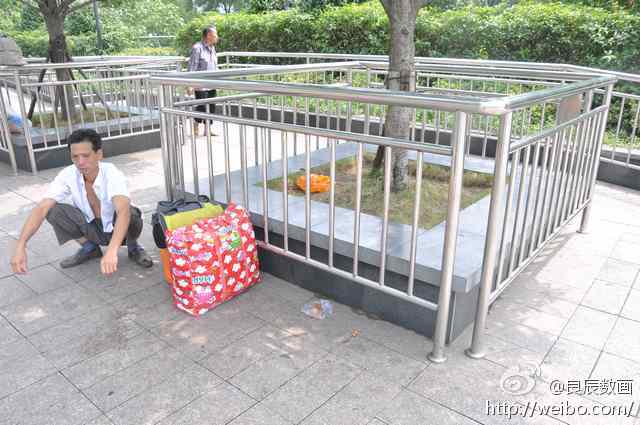 Via Ministry of Tofu: “In the southeastern city of Nanchang, the management of the city’s railway station has enclosed all outdoor stone benches with metal fencing to prevent travelers from sitting down on them, saying that travelers using the benches may harm the city’s image.” (Above picture via Free More News.)

Air pollution was zero in Beijing yesterday. Hope you made the most of it instead of reading links.

An email sent to Dan Harris in a post titled, “To The China Expats Leaving: Don’t Let The Door Hit You On The Way Out”: “In summation, you only are gonna get out what you put into this place, and rarely, if ever will the two balance out, if the only thing you have to contribute is vague and intangible, that’s probably what you will get out of it at best.  Sorry English teachers, in the end you are useless sacks of white flesh.  Sorry expat bubble community, if the only thing you can do is cater to the expat community, don’t expect to see anything come from China.  Sorry trading companies, your reliance on cheap crap being made here that you can mark up 50x cost didn’t really benefit anyone in the end and those factories are being pushed up the value chain and cutting you the fuck out of the equation.  Sorry foreign consultants, an entire generation of Chinese are coming back from overseas and can do your job better. // If anything is going on here, it’s a shift, a rather large one, a rather difficult one, but a shift none the less.  Those who can’t hack it are smart to get out, because they will not survive.” [China Law Blog]

Corollary: If you haven’t read it yet, here’s the most-tweeted China Daily Show post yet, “Why I’m leaving China.”

Just re-read the Mark Kitto piece. I’m sorry but I’m gonna say it: Kitto has one of those faces you just want to punch google.com/imgres?imgurl=…

With Gu Kailai sentenced, now we turn our attention to Wang Lijun: “Nevertheless, the state is expected to soon mete out its brand of justice against Mr. Wang, too. He could go on trial this month for his flight on Feb. 6 to the American Consulate in the nearby city of Chengdu, where he told United States diplomats of the Heywood murder before being escorted to Beijing by state security officers. The charge against him is likely to be treason, which potentially carries a death sentence, though officials may show leniency because Mr. Wang has cooperated with investigations, said several people with knowledge of the case.” [NY Times]

More on nationalism and Diaoyu: “Netizens critcise that Hong Kong Baodiao (保釣, defending Diaoyu Islands) activists, despite their pro-democratic stance, have hurt Hong Kong. They believe that this Baodiao action is to shift focus away from Hong Kong internal problems, especially when awareness of defending Hong Kong is growing.” [Dictionary of Politically Incorrect HK Cantonese]

China’s iPhone? “A year after the launch of its first phone, Xiaomi, the $4 billion-valued company sometimes referred to as the Chinese Apple, has unveiled its much-anticipated second-generation handset which is anything but a budget Chinese knock-off. // The quad-core Xiaomi 2 looks like being a real iPhone contender when it launches in October. It is powered by a 1.5 GHz Qualcomm Snapdragon processor and runs the company’s MIUI V4 skin of Android 4.1 Jelly Bean. The phone even has its own Siri-like voice recognition software, developed by Keda Xunfei.” [The Next Web]

It was only a matter of time before these rumors about Zhou Kehua circulated: “Rumors that serial killer Zhou Kehua is still alive were dismissed by police in Chongqing yesterday. // The rumors began after police closed access to the southwest municipality’s Gele Mountain. // The online rumors claim that the killer must still be at large in the mountain area where police and military personnel had been searching before his final shootout with police. // However, police said they were just searching for any hideouts Zhou may have used for further clues to the killer’s activities.” [Shanghai Daily]

Medical innovations? “This is weird-ass news out of the north… Last November, the Bank of Canada started circulating a new $100 banknote. They’re made of plastic polymer, and are extremely difficult to counterfeit. Yay. // So get this. One of the original images intended for the design showed an ‘Asian-looking’ woman scientist peering into a microscope — meant to celebrate Canada’s medical innovations. // But focus groups were reportedly unhappy with the researcher’s Asian appearance, so the bank eventually had the image redrawn to represent a more ‘neutral’ ethnicity.” [Angry Asian Man]

Chinese cricketer Jiang Shuyao something something gobbleygook narf. “‘Shu’, as he is popularly known throughout the club, has scored 196 runs for Cleethorpes’ second team, in the Lincolnshire League, for an average of 24.5 and with a top score of 50, in the middle order. For the academy side, opening or going in first wicket down, he has scored 362 at 51.7, with five fifties and a top score of 98.” [The Guardian] 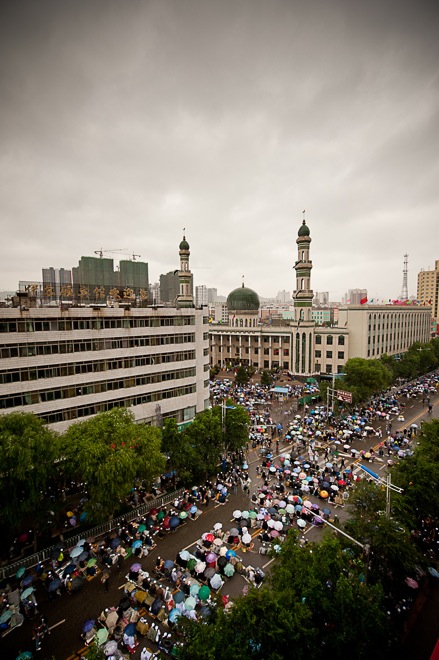 Ramadan in China, via Brian Hirschy

3 Responses to “Top-of-the-Week Links: A response to all those “whiny” departing expats, Xiaomi’s second-generation handset, and some believe Zhou Kehua is still alive”