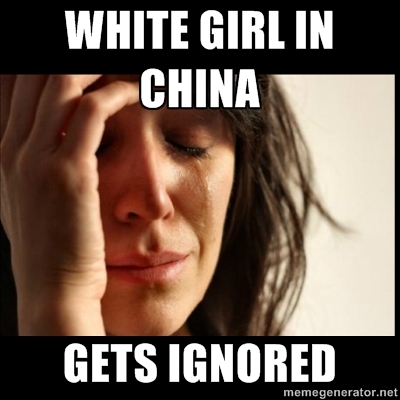 Usually when you see a headline like this in Chinese media — “Detect mentally ill in your neighborhood” — you think: Uh-oh. And then you find out the story is about authorities asking community residents to help “detect” those with mental illnesses “as the result of new regulations,” and you think: Oh snap, they made it illegal to be depressed!

But I think — think, because I’m feeling not at all cynical today — the people who made these guidelines have their heart in the right place. I’m not going to say these new “regulations” for “resolving the community’s mental health needs” are discriminatory, and I’m not going to imply that “resolving” could mean the asylum, or point out that “needs” might start with a scarlet letter. Detect the mentally ill so they can be given professional psychiatric help, of course.

I will simply say — simply — that the wording in this Shanghai Daily article, reposted by People’s Daily, could have been better:

Local residents will be asked to offer information if they know of people in the community who have odd behaviors.

Offer information, like… SNITCH? Boy that’s not at all awkward in a historical context.

And what mean you by odd behavior?

Some of the behaviors include saying something strange and talking and smiling to themselves, performing strangely in public like being naked, being over-talkative and not going to school or going to work, avoiding outside contact without proper reasons, or attempts to commit suicide or hurt themselves.

Boy that escalated quickly. Smiling to themselves… PUBLIC NUDITY. Over talkative… ATTEMPTS TO COMMIT SUICIDE.

Under a new guideline on mental disease diagnosis and treatment, local community hospitals will find residents suspected of serious illnesses.

Oops, sorry, I got carried away.

Those with registered residency and those staying in the city for more than six months including expatriates fall within the auspices of the community-based mental disease management network.

I’m trying my best not to imagine birthing pods from The Matrix upon the phrase “disease management network.”

Those detected with suspected syndromes will be included in a network for further diagnosis in professional mental health centers. Those with mental illness will receive timely treatment. Community hospitals will also offer regular visits and psychological rehabilitation to patients who live at home.

Right, of course. It’s a noble service, really. Really. If just one person can be saved (and, presumably, none sent away to the asylum or stripped of their dignity), the program will have been worth it.

But, um… what about those without registered residencies or not having stayed in the city for more than six months?

Ah I’m sure they’ll be just fine. What’s the worst that can happen?