The boy who pooped on a crowded Guangzhou subway last week — rather unceremoniously nicknamed the “Little Shit Brother” (in this video, it’s rendered as “pooping emperor,” as brother and emperor are pronounced the same) — is still fresh on people’s minds. We know this because that boy might have directly caused a fight to break out in a Shenzhen hospital on Saturday.

The scene: a sick boy, just one and a half years old, loses control of his bowels in the waiting room of a children’s hospital. This is rather normal, considering the boy is so young and he’s at this hospital specifically because he has diarrhea.

But someone in the waiting room chides the parents, and the phrase “pooping emperor” is used.

“When the child was defecating, I went to get a trash bin, you’re here yapping and yapping,” the father says at the video’s start.

“He was just saying on the Internet there was a ‘pooping emperor,’ wasn’t talking to you. He was talking to me,” says someone else, a woman surnamed Zhang.

“My child is just one and a half, you call him ‘pooping emperor’” the father angrily shouts. “You have character, you’re a doctor, are you?”

Zhang, who wishes to stay anonymous, explains that the boy was actually very close to the bathroom, and that she and her husband only kindly reminded the parents of this fact.

And then, Zhang’s husband offhandedly remarked, “No wonder on the Web they’re all talking about Guangzhou subway’s ‘pooping emperor.’”

That was the last straw for the boy’s parents, who were already stressed out by their young child’s illness. A fight ensued, during which Zhang’s clothing got ripped. 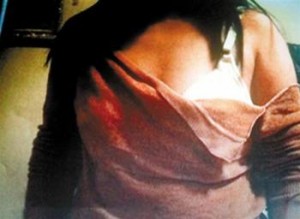 Forgive us if that picture looks like it belongs on a sexychat site.

2 Responses to “Fight Breaks Out In Shenzhen Hospital Over Pooping Toddler, And It’s All Little Shit Brother’s Fault”