We — you, me, the world — might see outgoing president Hu Jintao as a wan robot less charismatic than a cardboard box, but there was a time during this man’s life when he was sprightly, good-humored, and jovial. Let this video — of a speech he gave in 1984, in front of colorful balloons — be proof. It was uploaded two months ago to Youku (embedded after the jump for those in China), uncovered on Twitter yesterday.

Ten years old, Hu Jintao took the rostrum as the General Secretary and President of the Communist Party of China. Surely the corrosion of his soul — that personable and simpatico servant of the state – began in the years before his final ascent. We’re not sure when his better alter ego died, like a wild bird clipped and caged, its julienned body served up to factions that grew fat with disinterest in China’s long power game, but let us take a moment to mourn and remember. Hu Jintao deserves it. He was a human being once, like us — you, me, the world.

And let us hope — because he is human too — that Xi Jinping’s soul doesn’t suffer a likewise transformation, prodigal ruination.

Young #HuJintao on video from 1984, a speech full of passion & smile. he’s not always robotic – v.youku.com/v_show/id_XNDQ…

Hu Jintao too stiff to speak off the cuff?The video in 1984 shows it’s years of politics that has stiffened him.t.cn/zj4H7z8

He looks like a man running for office. MT @ministryoftofu: Hu Jintao too stiff to speak off the cuff? t.cn/zj4H7z8

R.I.P. Leave your well wishes in the comment section. 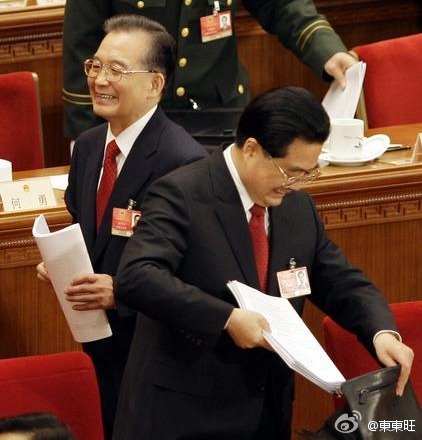 Note: this image, which may be the best I’ve seen all week, has a side story that deserves its own post. Luckily, Tea Leaf Nation has written that post:

Since its posting on November 23, this simple image has been retweeted over 103,000 times. But perhaps chary of the discussion that would result, censors suspended the threaded comment function on the post. That means that Weibo users do not have an easy way to comment directly on the image or Wang’s assertion, which means no ad hocdiscussion forum can form around this very resonant image.

…It’s ironic that censors would revert to such tactics when faced with an image that could only burnish Chinese leadership in the public’s eyes… At least the image was seen far and wide in the Chinese blogosphere, although for Wen’s and (especially Hu’s) would-be image-makers, it’s too little, too late.

Just so you understand why that pic of Wen Jiabao & Hu Jintao matters: it was retweeted over 100,000 times.