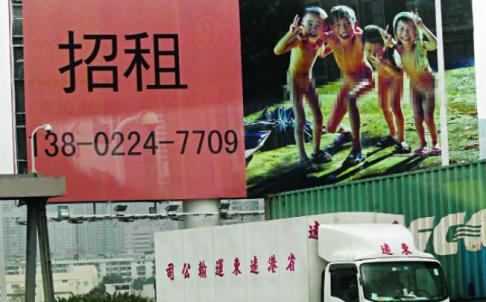 The Shenzhen ad firm Lanbite Advertising has come under fire recently for an eight-meter-high billboard on the Shenzhen-Hong Kong border that shows four naked children playing in the grass. SCMP has the news:

Since the advert first appeared late last month, tens of thousands of commuters passing between Lok Ma Chau and Huanggang in Shenzhen have probably seen it.

“It should be a private picture for a mother to keep at home as part of the family’s memories,” said Daisy Lee, a Tuen Men resident who has a six-year-old daughter and commutes between the two cities regularly.

“It is definitely pointless and inappropriate to post [that] in public, especially for commercial advertising.”

We’ve had this discussion before: when five-year-old girls were used as bikini models at a car show in Wuhan last month, and when a newspaper ran a photo of a kid peeing into a cup at a hotpot restaurant in August. How old is too old, exactly, for nudity? The kids in the billboard — how old do they look? What if they were all three years older? Too much? I really don’t know.

But what is almost certain is that the controversy has been a boon for the ad agency. The image is intended to market the billboard space itself, so the pitch might go something like this: Hate this image? Pay us to replace it!

Although it must be said that the picture has absolutely nothing to do with the purpose of the sign. The large words to the left read “for rent” — which is, at best, incongruous, and at worst…

Confusion over the short slogan next to the picture – “for rent” – appears to be adding to the debate. Some who have seen the sign say it could appear as if they boys themselves are for rent.

“Oh this is dreadful and just appalling,” wrote one Facebook user. “Totally inappropriate and downright creepy, given what the sign says.”

5 Responses to “How Wrong Is It To Use Nude Children In Billboard Advertising? Shenzhen Agency Finds Out”