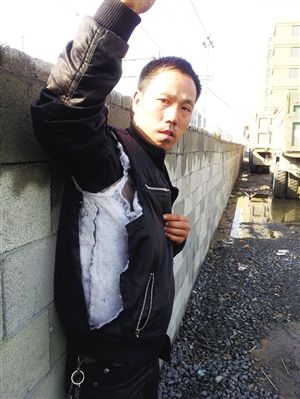 Around noon on Monday, a 13-month-old baby was run over by a birth control official’s car in Rui’an county near Wenzhou, Zhejiang province, according to state media. Reports the Guardian:

According to the report, he had been in the arms of his father. But after the officials started their vehicles, he was found crushed under one of the cars. Officials took him to hospital but doctors were unable to save him.

The father is Chen Liandi, 39, pictured above showing his ripped coat to reporters.

The Guardian has a few more details of what transpired:

Eleven officials from Rui’an birth control office near Wenzhou in eastern Zhejiang province had driven to his home to fine his parents for breaching China’s strict rules on births, according to a briefing from the local propaganda officials.

The baby’s father, Chen Liandi, 39, became agitated and forcefully obstructed the team, while his wife, Li Yuhong, agreed to go with them so they could continue their “thought work”, the short news report claimed.

It’s not explicated how, but the baby got separated from his father, and run over.

People’s Daily reports that the driver, surnamed Cheng, is being investigated for criminal offense, and has been detained “in accordance with the law.”

UPDATE, 2/8, 3:14 pm: Via Shanghai Daily: “Police have detained a local official and his driver in Zhejiang Province for fatally running over a 13-month-old boy during an argument with the baby’s parents for violating China’s family planning rules.”