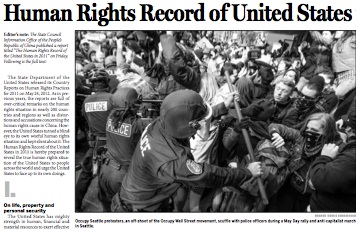 On April 19, the US Department of State published its annual Country Reports on Human Rights Practices, which included a section on China. It was typical, mundane, and features nothing you don’t already know, including restriction of Uighur and Tibetan movement, harassment of journalists and dissidents, prison labor, discrimination, extrajudicial killings, etc.

On April 21, the State Council Information Office of the People’s Republic of China published its annual Human Rights Record of the United States, which was typical, mundane, and features nothing you don’t already know, including school shootings, low voter turnout, politically authorized eavesdropping, a widening income gap, discrimination, extrajudicial detention of foreigners, etc.

Because we’re on the same damn carousel that goes round and round, a year has passed but the sights haven’t much changed. Below, our previous post on this subject, with analysis from TAR Nation.