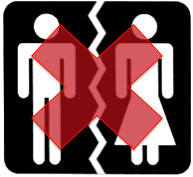 In March, China began regulating the number of properties families could buy, prompting couples around the country to file for divorce so they could buy more properties. In Nanjing, the schools available to children were tied to household registration, causing another wave of divorces in that city (we wrote about this one, citing Louis CK). So what’s a poor government to do in the face of that terrible loophole to its policy?

The Nanjing-based newspaper Modern Express reported on Monday that the marriage registration office of the Gulou district in Nanjing first started such a restriction policy in early March, as the number of divorce cases the office was handling far exceeded expectations.

The rate had been spiraling out of control.

Ma Hong, an official from Nanjing Bureau of Civil Affairs, said some 18,311 couples had filed for divorce in the first six months this year, 1.7 times the number from the same time last year.

We’re not entirely sure how one now files for divorce now. Via lottery, like with license plates in Beijing? Can you imagine wanting to leave a psychologically draining, life-sapping, spiritually abusive marriage, but being told you can’t because that dipshit over there also wants to end his marriage so he/she can increase the family’s material assets?

There is, of course, a Louis CK joke for the occasion again:

2 Responses to “Nanjing Caps Divorce Rate – For Sake Of Money, Of Course”