This is quite the tragic story. On August 9 at about 4 pm, a young man, reportedly 26, went to Kudi Pet Park in Beijing’s Chaoyang Park with his wife and two dogs. Only his wife would walk out alive.

“This used to be a dog amusement park, now it’s a park of horrors,” an eyewitness tells a Beijing TV reporter in the above video.

“The pet park is for dogs to go swimming,” another eyewitness says. “We all raise our dogs like they’re our children, and then this happens!”

Around 5 pm, the park had reportedly basically cleared out except for the man, his wife, and their dogs, who were swimming in the pool. All of a sudden, the dogs — a golden retriever and a poodle — went limp. As the man went in to pull them out, he also became lifeless. His wife reached to touch him, and she too passed out.

One eyewitness says she quickly realized that an electric current must have been flowing through the 30-square-meter pool.

While rescuers attempted to revive the man, the wife regained consciousness. The man was sent to a nearby hospital, where — with relatives outside loudly weeping — he was declared dead.

Beijing TV camped out at Kudi Pet Park’s front gate and intercepted two officials as they were leaving in a car. They got out but gave no comment for the camera. We’ll have to wait for more info.

Just two weeks ago, we saw a girl killed by an electric shock from a karaoke parlor’s defective microphone. Now this. 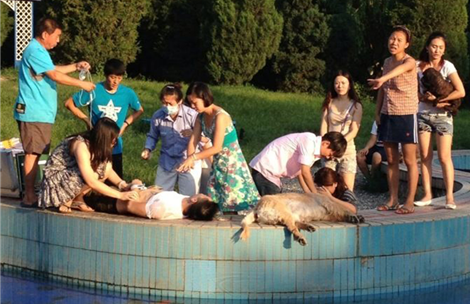