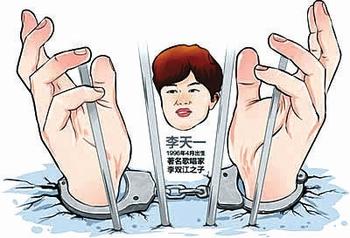 Seventeen-year-old Li Guanfeng — alternately called Li Tianyi, problem child, brat, and rapist — was found guilty of gang rape by Haidian District People’s Court in Beijing earlier this morning. His high-level connections — his father is renowned PLA singer Li Shuangjiang, and his mother is singer Meng Ge — apparently weren’t enough to get him off the hook for allegedly sexually assaulting a young woman with four of his friends in a Beijing hotel on February 17.

SCMP has this report:

“In the course of committing the crime they have performed obscene acts to the victim, which should be seen as part of the criminal act of gang rape and have been put into consideration when determining the level of punishment,” according to verdict shared on the microblog of the Beijing judiciary.

Li’s sentence is harsher than all except one of his co-defendants, because he chose not to plead guilty. Another defendant surnamed Wang, the only one of them who was an adult when the crime was committed, was sentenced to 12 years in prison. The other three received jail sentences of between three and four years.

And like so, the saga nears its conclusion (an appeal is forthcoming, and there’s the matter of where Li will serve out his term). The story first broke in February, and has been allowed — almost surprisingly, considering the players involved — to remain in the limelight almost every step of the way. In July, when a court momentarily rendered Li’s alleged crime as “taking turns having sex,” we wondered aloud whether authorities were serious about prosecuting this young man with a history of misbehavior. “The public will never trust Chinese justice until an example is made of someone,” I wrote, referring specifically to the country’s second-generation rich who seem to find increasingly creative ways of ducking discipline and receding from the glare of public censure. But that question appears to have been answered.

Perhaps part of what went wrong is the Li family chose to let this drama play out in public, maybe under the mistaken notion that their son was a sympathetic figure. Li’s defense team — almost led by the mother, Meng Ge — had been leaking information about the victim and the bar where she met Li Guanfeng for the past month. Notable figures such as Tsinghua professor Yi Yanyou were also enlisted (directly or not) to help the cause. Meng even asked the trial to be public — when that request was denied, it should’ve been a clear sign that the defense was doomed. In the end, the court appeared to scoff at Li’s defense, ruling that the victim’s profession “had no direct relationship” to the charges.

Are we heartened? Or have we just learned that the best, only way to wiggle out of charges, if you have the means and ability, is to shutter yourself from the public eye and negotiate in backrooms?

The following one-minute video on Youku, a straightforward news report on the verdict, has been watched 778,000 times in the hour since it was posted. Li Guanfeng may have never had a chance.