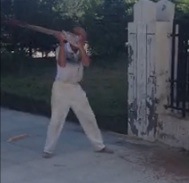 Want to see some animal cruelty? Of course you don’t, because you’re a sane, well-adjusted human being with a decent upbringing.

But goddamnit, here’s an old man beating a Tibetan mastiff to death in Tianjin, in plain sight, under blue skies — while someone fucking films. (Picture shows an old man about to hit a cowering dog with a stick, so we don’t recommend clicking through.)

Care for Chinese Animals has this report:

On 30th Aug, an old man beat his own Tibetan mastiff to death in a street of Tianjin. People passing by trying to stop him but were unsuccessful. Tens of thousands of online and overseas media spread the news, causing public outcry against the man. We want the Tianjin Police to investigate the matter and make sure the murderer is punished, and we are strongly calling for the Tibetan Government to bring in laws that will prosecute people who abuse animals.

We’re not sure why he beat his dog to death, or why he chose to do it in public with the creature tied to a fence. But this dude — fuck him.

Here’s a video of it (and on Youku). An old man is clearly shown bludgeoning a dog to death, so we don’t recommend clicking through.

Incidentally, Tibetan mastiffs are an ancient and noble breed, sometimes passed off as lions, and one in particular — an 11-month-old pup named Hong Dong (“Big Splash”), who subsisted on beef, chicken, abalone, and sea cucumber — was sold for a record 10 million yuan ($1.5 million) in Qingdao in 2011.