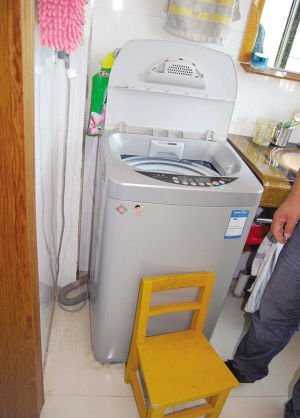 A pair of sisters, ages 4 and 2, died inside their home’s washing machine on Saturday around 1:30 pm in Nanchang, Jiangxi province. The details are grisly.

The girls, surnamed Tu, were reportedly playing at home when they somehow both fell into the washing machine and got tangled in the revolving gears. (One of them must have powered on the machine?) They both died of apparent asphyxiation.

Both parents were home at the time: the father was in his room listening to music, and the mother was preparing food. A one-year-old boy was also in the house.

Obviously there are unanswered questions, which we’ll leave unasked for the moment, but police have ruled out foul play. Investigators found a step-stool next to the washing machine (pictured above) and concluded the children must have crawled in, for whatever reason.

However. Yesterday, the local police bureau said they never received a call about the incident on the day it happened. The young children’s bodies were also interred before they could investigate. It was only two days later, on September 23, that the victims’ family filed a report, arousing plenty of suspicion from netizens.

As for why the girls were interred so quickly, the grandfather issued this response: “The girls were so beyond recognition at the time, it was painful to look. And since they were small, according to local custom, they should be allowed to rest in peace.”

The police say the mother and father have a good relationship. They found no signs of foul play.

As for the washing machine’s ability to kill, authorities are still investigating.