Louis CK was in Beijing in June 2012 to film the (wonderful) finale of (the wonderful) third season of his show Louie, and apparently he got enough material to tell stories for years. He was recently on David Letterman, where — for whatever reason — he was prompted to relive his experience.

Old man Letterman begins by asking if Louis went to Shanghai, and immediately you know this interview will go horribly.

“Beijing,” Louis corrects him. (“It’s more like a giant Dayton, Ohio,” he later says of the city.)

“They probably hacked your computers and stuff,” Letterman suggests.

“Sure, sure,” Louis agrees, in the way someone might brush off a grandfather who uses the phrase “back in my day.” 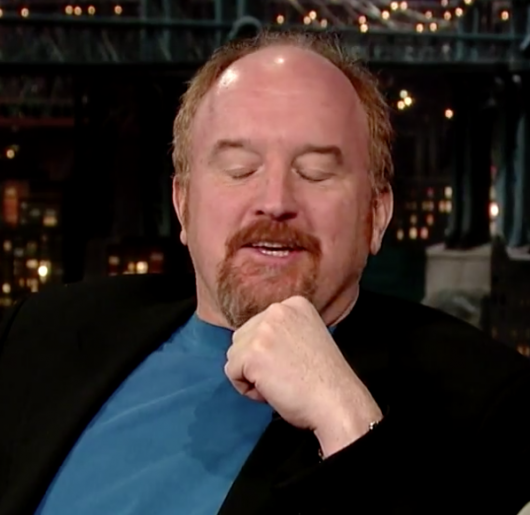 “The United States is comfortable with you doing a show in China?” Letterman asks, as if China were fucking North Korea.

“A lot of movies are produced there and stuff,” Louis says.

“I understand,” Letterman replies, though he clearly does not.

Louis then talks about the stand-up show he did in a “very ancient theater.” “I was, like, Do I have to worry about what I say? And they’re like, Dah, have fun!”

“They’re just such fun-loving folks,” Letterman butts in with a sarcastic wave of a hand. “All they want is fun over there.”

Yeah, I don’t know, why would commies have fun? And what could they do, drive tanks around their farms, amirite?

After confirming that Louis doesn’t speak Chinese, Letterman asks with an old-man smirk, “What about the people in the theater?” How is he not getting that English-speaking people live in Beijing? Or that there are expats here? I will never understand how old white people think.

“The sense I get is that the government doesn’t really do anything anymore, but everybody is really scared, so if you do anything weird everybody’s like Stop it,” Louis says. ” So you know, we were told somebody might disappear if you use that joke on the show.”

“Oh. My. God,” Letterman interjects, because he actually believes this. Louis CK, comedian, relays a joke that one of his China friends told him (“somebody might disappear”), and Letterman believes it. Go to the 1:50 mark to hear him believing it.

Toward the end, Louis describes how he and his team went into a mountain seeking a Chinese family to take him in so they can film a scene. They stumble upon an old lady who invites him in and starts feeding him (that’s the final scene of the season, by the way).

Apparently unable to mine this delightful anecdote for anything, Letterman suggests:

Look, comedy is hard, I get it. China is hard (not as hard if you actually tried, but whatever). But you can combine the two without being a hoary halfwit who reinforces every narrative cliche. You can be better than David Letterman.