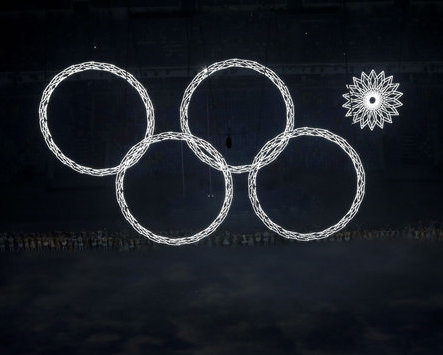 China is officially (politically, that is) an enthusiastic supporter of the Sochi Games, which is why Chinese athletes walked out at the opening ceremony waving both Chinese and Russian flags. To no one’s surprise, then, the pro-government media here is peeved by all the negative coverage in “Western media.” Speaking for them all, Global Times has just published an editorial headlined, “Booing Sochi only shows West’s bigotry.”

Sure, one tires, especially if one has lived abroad, of first-world complaints — particularly from media types who are prone to narrative-following and will invariably proclaim the Games a “surprising” success in about two weeks — but Global Times, per usual, takes it a bit too far, into sourceless sensationalism, confused truthiness, and outright lies:

Some say it is the journalistic nature of the Western media to be critical and ready to challenge authorities. But the excuse sounds so hypocritical when you look at the Western coverage of the 2012 London Summer Games, which was much more friendly and festive.

Critics called various aspects of the London Olympics a “waste of money,” “humiliating shambles,” and “disconcerting.” (That last one was from Mitt Romney.) Then they slammed the logo and mascots. The organizers were called a “closed oligarchy” — by the London Assembly! BBC published “10 reasons some people will dread the Olympics.” Ten days before the opening ceremony, the Guardian published this so-very-British headline (because it’s sarcastic) above a picture of a torchbearer grimacing in a downpour. During the Games, there was a protest featuring topless women. A year after the Olympics, Oliver Wainwright of the Guardian wrote, “At every junction of this roaring A-road sprouts a steroidal tower, each clad in ever more lurid colours, transforming the street into a gauntlet of competing ambitions. Looming over adjacent council estates, these brash totems are a monument to Olympian greed.” You know who cheered the London Olympics though? “The London Olympic Games were hailed a success by visiting journalists,” wrote Xinhua.

Since the ending of the Cold War, only the 2008 Beijing Games and the ongoing Sochi Games have experienced such criticism. It is surprising how much the Western media stick to their bigotry.

The “Western media,” if I may say, have gone easy on Russia. Most of the negative stories I’ve seen are about toilets, infrastructure, stray dogs, and un-homely hotel rooms. Very few articles have mentioned the Russian government’s targeting, sometimes murder, of journalists, or their systemic, massive corruption that is objectively much worse than China’s, or their lack of social cohesion, or the environment, or NSA-level surveillance… About as negative as the media has agreed to go is a snarky remark here and there about Vladimir Putin’s homophobia.

Russia is much smaller and weaker than the Soviet Union. No matter how “tough” Putin is, today’s Russia will no longer fall back to the Stalin or Brezhnev times. But the West’s endless criticism of Russia under Putin’s rule appears no different from the elder generations’ stances against the Kremlin decades ago.

Okay Global Times, if you’re such a tough guy, you tell Putin that he’s not so tough.

The aggressive political strategy of the Soviet Union used to make the West restless. But today, strategically the West has nothing to worry about besides fighting terrorism. The ruthless pressuring of Russia and the alert against China are pushing the West to the verge of another round of confrontation. Enthusiasts for a “New Cold War” could jeopardize a historic chance for a better world.

Before you read it, please understand how comment sections on pro-government editorials work: they often are frequented by harems of fifty-centers — people who get paid to post pro-China comments on stories — presumably because these people know their employers will come across them. Usually, one commenter will post something, and then someone else will try to one-up, and then someone else. But our man (or woman), topolcats, decided to do the work of four people by writing a four-paragraph paean to… the Russian resolve? It’s anti-West, so it has to be pro-China. It’s also batshit crazy.

The West since the time of the Czars have been trying to rape,control and plunder Russia, USSR, Russia from Napoleon to Clinton & beyond!!
These fascists will never stop but will never win either if history is an indication.

Someone should tap Bill Clinton on the shoulder and tell him he was just compared to Napoleon.

After 1917 Europe and the united states attacked the USSR. But only after 3 years,Trotsky defeated the combined forces of western Europe & America and then came the Nazis. The dream of Hitler and crew was to conquer western Europe, destroy Russia and hook up with the Japanese in Asia and jointly control the world. Yet again Russia/USSR destroyed the german Anti Christ.

Russians suffered greatly during World War II, and they should be rightfully proud of their victory over Nazi Germany. But only someone willfully ideological — i.e. the worst type of person — would confuse the people’s victory with the government’s, since Stalin’s five-year purge of everybody was interrupted only by the war effort. Stalin then rewarded his countrymen’s bravery and sacrifice with further purges until his death, leaving behind a brutal police state whose legacy survives today.

In Archangel lies the graves of the first Americans ever killed in the western invasion of 1917…standing as a monument to anyone (America), who dares try to invade again will be destroyed not to mention the million of graves of Italians and Germans fascist soldiers killed in the great patriotic war.

Today Russia still stands as a country without debt and armed to the teeth ready to do battle with the forces of evil to protect mankind whenever called for!…America,Europe cannot stand that two primary countries, China and Russia stands in the way of world domination…if we are lucky the spiritual guardians of mankind will always allow Russia & China to defeat American imperialism!

I like this, actually. Spiritual guardians of mankind. I mean, slightly theosophical, but poetic. To think of it, a little too poetic for the comment section of a Global Times article. So now we know: fifty-centers are actually unemployed Chinese writers. All of a sudden, I have a newfound respect for the work they do.