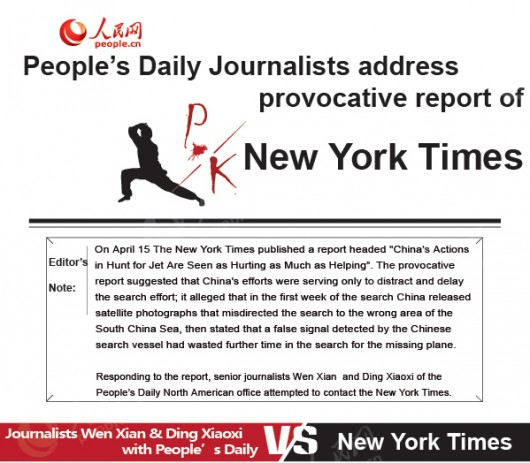 On April 14, New York Times reporters Kirk Semple and Eric Schmitt published an article titled “China’s Actions in Hunt for Jet Are Seen as Hurting as Much as Helping” that quoted two government officials — one from the US and one from Malaysia, both unnamed — who said China has not, to put it nicely, contributed much to the search for Malaysia Airlines Flight MH370. It was a disturbing piece, not least because it seemed to signal the search may have entered a new phase in which the frustrations and difficulties of finding the missing jet could spill into finger-pointing and politics.

No one was doubting that the Chinese had the best intentions in mind, but the truth — an unfortunate one that no one seems able to deny — is that they lacked the expertise and technology to help. (So did other countries, of course, like Malaysia, so its government official’s quote — “‘Really helpful, aren’t they?’ he said sarcastically” – seems diplomatically tone-deaf.) The New York Times article wasn’t exactly groundbreaking, but there was nothing offensive about it. Notably, the journalists did their due diligence:

Not everyone agrees — namely, People’s Daily, the official paper of the Chinese Communist Party. It decided the Times were guilty of exploiting the tragedy to “launch a few cheap shots at China,” as it wrote this morning in a piece called “People’s Daily Journalists address provocative New York Times report” (as tweeted by NY Times reporter Edward Wong). For whatever reason, instead of using text, the piece (“op-ed”? we’re not sure what to call this) is a series of screenshots: 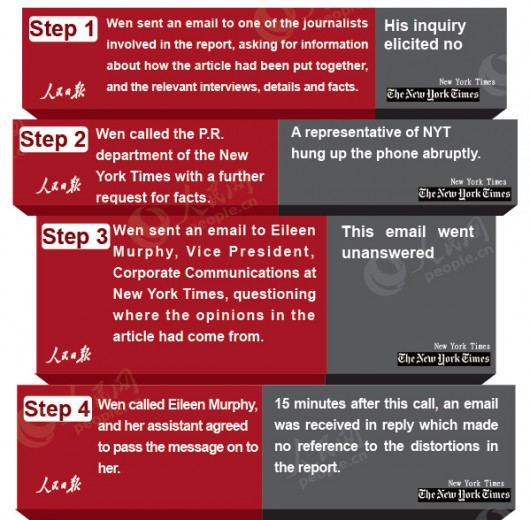 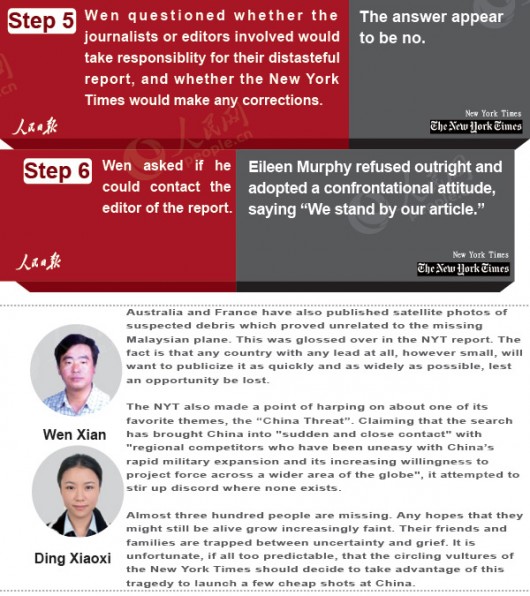 Yes, it does appear the People’s Daily actually called the Times’s PR department and asked – demanded – that reporters turn over their sources. The US justice department has had less success getting journalists to comply, so People’s Daily really had no chance here.

The problem, once again, seems to lie in how China views the role of media. Here, newspapers are expected to leave inconvenient truths unsaid for fear of being rude, or — to put it less nicely — they are trained lapdogs for the government’s use. There is little to no self-awareness, no concept of a public editor, and practically no loyalty to truth, or “facts.” In that case, perhaps we should commend People’s Daily: at least they made a couple of calls, and sent an email.