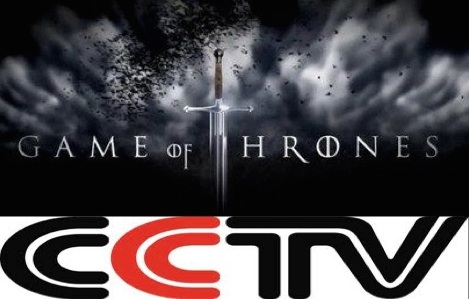 HBO’s Game of Thrones arrived in China last week, but the fit-for-CCTV broadcast was so rigorously edited to conform to some “public morality” that one netizen hilariously called it “a medieval European castle documentary.” But amid all the articles about this development, we may have lost sight of a more amazing fact: Game of Thrones – a show about political wrangling, skulduggery, sabotage, dissolution, sex, etc. — was allowed to air on Chinese TV. It took two whole days before we got this Ishaan Tharoor post on the Washington Post, titled:

Why ‘Game of Thrones’ is actually dangerous for China’s rulers

Indeed, if China’s censors watched more closely, they could find other reasons to keep on cutting.

In “Game of Thrones,” the centralized state — the united Seven Kingdoms of Westeros — is an entity balanced on a thread, forever vulnerable to the whims of the power-brokers of the land. The TV show compels you to root for separatists — the charismatic, stoic Starks of the North — who are trying to split away from the tyranny of the capital. Moreover, the show reinforces over and over in the viewer’s mind just how unnatural and manufactured the centralized authority of a high king is.

Tharoor draws other parallels between Westeros and — I’ll just say it, though a reasonable reader will understand that much of the piece is tongue-in-cheek — China. For example, the Wall that the Night’s Watch defends may well be the Great Wall, etc. But then we eventually get to this rather amazing comparison…

The most storied noble house in “Game of Thrones” is that of the Targaryens, the silver-haired, dragon-riding family that begins the show in exile across the sea. We learn that the Targaryens once ruled all of Westeros until a rebellion, punctuated by a few hideous slaughters, chased them to a small, craggy isle off the coast called Dragonstone. Not long after the last of the Targaryens flee the island for more distant hideaways, the rock becomes the fortress of Stannis Baratheon, another lord who thinks himself the true ruler of Westeros. Dragonstone exists in the series as a permanent reminder of dissent, brooding sullenly off the shores of the realm.

It doesn’t take a tremendous imaginative leap to see a parallel to China. In 1949, Mao Zedong’s Communists defeated the nationalist forces, the remnants of which fled en masse to the island of Taiwan.

Holy crap! Dragonstone is Taiwan? If a Chinese paper ever picked this up… 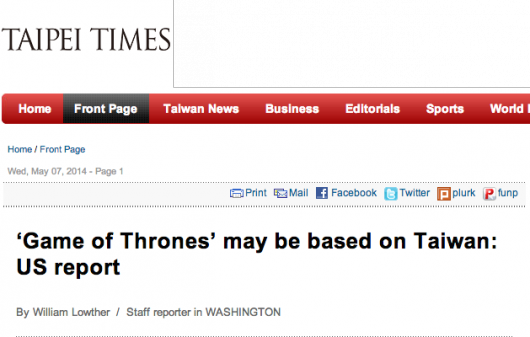 The blockbuster fantasy TV drama Game of Thrones with all of its violence and sex, may be based in part on Taiwan and the nation’s political and military struggles with China.

According to the Washington Post, the fictional island of Dragonstone — a centerpiece in the story — may in fact be a metaphor for Taiwan. The TV series created for HBO is sometimes drawn from “real historical events, and suffused with real lessons for nations and governments,” the Post said, and it does not take a tremendous leap of imagination to see a parallel with Taiwan and China.

Chinese censors may not read the Washington Post, but the Taipei Times? I think it’s time we ask:

Now the question is whether Taipei Times interpretation of @ishaantharoor WP essay will get GoT banned in China.

Game of Thrones is likely doomed, just like [insert character of choice]. How many in-show kings will die before the show gets the ax?

Although whatever happens, China’s rip-offs of it — GoT is the most pirated show of all time, after all — will surely continue:

2 Responses to “How Long Until “Game Of Thrones” Is Banned In China?”