Take note: if you go on a slashing rampage in public, you’ll be shot and treated like a rabid dog, held down by metal poles. Take a look at the video, which shows police manhandling a knife-wielding suspect who wounded six passersby yesterday at Guangzhou Railway Station.

Initial state media reports said four people were involved in the attack, but as Reuters reports, “Guangzhou police said their initial inquiry found there was just a single suspect. He had been shot and wounded.”

Xinhua news agency said that the attacker had been hospitalized, and that police were not immediately able to identify him as he had no documents on him.

State television said that reports police had picked up another suspect near the station were also wrong, and that a person who had been detained had nothing to do with the case. 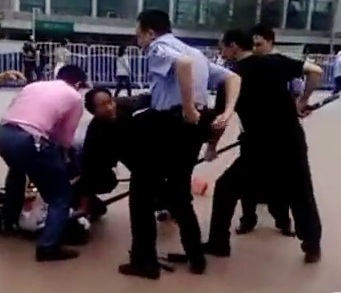 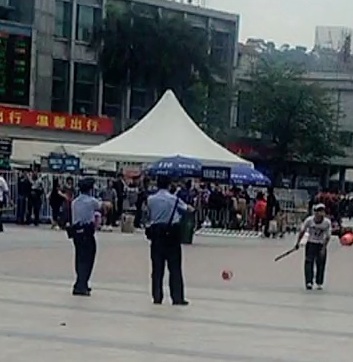 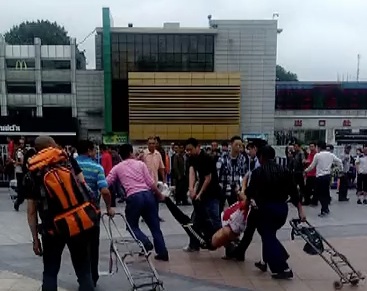 The area has returned to normal, reports the Guardian:

The area was back to normal by Tuesday night, though one armed policeman could be seen near the spot where the man struck and others wore helmets and bulletproof vests. A security guard carried a large U-shaped metal implement on the end of a long pole, of the kind given to guards to incapacitate attackers following previous stabbing incidents in China.

Meanwhile, fears of extremism are again on the forefront of everyone’s minds. Last Wednesday, a knife and bomb attack at a Urumqi train station wounded 79 and killed one civilian. On March 1, 29 were killed and 130 injured in Kunming Railway Station. And last October, an SUV exploded in Tiananmen in what was described as a suicide attack.

Speaking while on a visit to Hong Kong, U.S. Assistant Secretary of State for East Asian and Pacific Affairs Daniel Russel expressed “horror, outrage and sympathy” at the attack.

“We oppose terrorism in all forms, and in those instances where the available information or the information shared by the Chinese authorities pointed to terrorism by a group or individual, we have condemned it as terrorism,” he said.