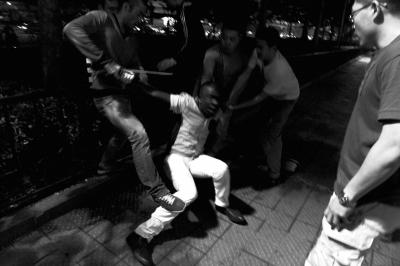 Because it’s politically expedient to do so — proven by Ronald Reagan, Bill Clinton, etc., to work — Beijing conducted a drug investigation that recently culminated in a bust of street-level slingers in Sanlitun. This news doesn’t affect the vast majority of Beijingers, foreign or local, which is to say, there’s little reason any of us should cheer. If anything, we should cringe, knowing these “crackdowns” almost always disproportionately affect those on society’s fringes who are most powerless to defend themselves. It’s not a coincidence that highly publicized drug/prostitution stings never seem to target princelings or the monied owners of hotel brothels.

That’s what makes this blog post from Michael Wester, CEO of the Beijinger’s parent company, True Run Media, so surprising. Near the bottom of what starts as a straightforward news blog post, there’s this (all emphasis his):

The bust comes as welcome news to the vast majority of foreign residents of the city who choose to live within the letter of the law. Foreign drug dealers who seem to operate with abandon in certain areas of Sanlitun have been both an embarrassment and a downright hassle to foreign residents, whom the dealers often strike up friendly conversations with as an intro to offering drugs for sale.

What happens, exactly, after dealers offer their ware? Do they — facing rejection from those poor study-abroad students who don’t have 700 RMB in their pockets, to say nothing of the desire to get high when they can obliterate their minds on 10-kuai shooters and 15-kuai street beverages laced with a poison called alcohol — snarl and physically intimidate? Do the smiles that prefaced those friendly conversations turn into glowers of fury and menace? Need I remind, this is an area that frequently reeks of piss, drunkenness, and buffoonery, an area in which foreigners (law-abiding, surely!) pass out till the next afternoon. And we think our African friends are the problem?

That excerpted paragraph comes directly after this one:

The dealers will face the same penalties as local citizens, the report notes. China’s drug laws are notoriously strict, and dealing over 50 grams of methamphetamines can earn a suspect the death penalty.

No pause via quote or ellipses, no further questions, nothing to help us process the utter insanity that dealing 50-some grams of meth can lead to execution.

The bust comes as welcome news to the vast majority of foreign residents of the city who choose to live within the letter of the law.

Look… we’re reasonably confident Wester’s an upstanding citizen, a nice enough guy, and that we’re reading too much into all this. But he’s also the head of Beijing’s largest expat media empire. Has he risen so above expattery (have you seen the Beijinger’s forum?) that he can parrot, apparently without self-awareness, an apparatchik’s cliche? Living within “the letter of the law” doesn’t make a person decent: you can still be a judgmental prick.

And since when do we celebrate China’s haphazard application of laws? How many laws do the Beijinger’s readers break, those with fake gas-scooter licenses (which you can buy on the Beijinger’s classifieds!) and visas obtained through questionable qualifications?

Do you use a VPN? Ever gotten into a black cab? Drank in an unregistered bar? We wonder, too, about the Beijinger’s ISBN — does it permit them to run advertisements alongside content?

What if Law didn’t criminalize certain service providers and institutionalize racial profiling? What if it made buyers equally responsible by tying them to the same risk of draconian penalties? What if laws weren’t made by those who insist on “social stability,” as if that weren’t another term for homogeny, conservatism, and control?

Bringing the conversation back home: who’s doing more harm in Sanlitun? The drug dealers who honestly don’t care about pushing their product on those who don’t want it? Or the army of fake-booze distributors, the pickpockets, the black-out-drunkards, the police officers in the station around the corner who will do absolutely nothing about fistfights and stolen property but who’ll strong-arm the hell out of roadside vendors to ensure they receive their cut?

It’s something for all of us to think about the next time we’re tempted to deem someone else’s choices illegitimate and say they should be punished “according to the law.”

40 Responses to “Why Is The Beijinger So Callous Toward Sanlitun Drug Dealers?”