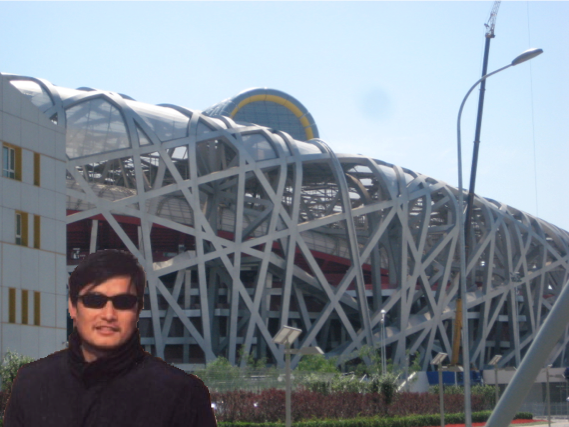 Reuters (and everyone else) is reporting that “blind Chinese activist Chen Guangcheng is under U.S. protection in Beijing”:

Texas-based ChinaAid said it “learned from a source close to the Chen Guangcheng situation that Chen is under U.S. protection and high level talks are currently under way between U.S. and Chinese officials regarding Chen’s status.”

All of this is unconfirmed, but healthy skepticism aside, it at least makes sense that Chen would seek protection at the US Embassy. For all of America’s shortcomings, the country is still seen as a beacon of justice — a symbol if nothing else, but a powerful symbol — and it clearly has the diplomatic muscle to at least bring Chinese officials to the negotiation table.

It should be noted that all of the sources who say Chen is in the US Embassy are friends of his who would want the press to believe he’s there. Journalists have been more than happy to tie this story with Hillary Clinton’s impending visit and the Bo Xilai scandal, meaning Chen’s story is being amplified. And because it’s amplified, it raises awareness among Chinese observers, which in turn puts more pressure on the central government to do the right thing. Those in charge can no longer hide behind their go-to reason for ignoring human rights abuse: the overused excuse that “we didn’t know about the maltreatment of so-and-so over at B.F.E. Village because news never got to us, since our walls are made of ivory.” More and more people are learning about Chen’s plight, about the Linyi myrmidons charged with browbeating all who approach his home and the lengths they’ll go to keep an ailing blind man from communicating to the outside world. And now they know — or are beginning to find out — that the central government also knows. No more of your masquerade of ignorance, Zhongnanhai.

If American diplomats weren’t talking to Chinese officials right now about Chen, one wonders if China would have imposed its blanket blackout of CGC coverage. There’s radio silence on the airwaves, which is to be expected, but as China Media Project points out, there’s also been a heavy-handed tightening of censorship on social media:

Nearly all possible searches have been blocked, and even the Chinese word for “blind person”, ormang’ren (盲人) — Chen Guangcheng lost his sight during his early childhood — turns up the familiar warning that: “According to relevant laws, regulations and policies, these search results cannot be shown.”

Here are some examples of what can’t be found:

…A search for the Chinese surname of Cheng Guangcheng, but replacing the last two characters of his name with the letters “GC” brings a warning from Sina Weibo that results cannot be shown.

…A search for the English initials of the three Chinese characters making up Chen Guangcheng’s name, “CGC”, brings a warning from Sina Weibo that results cannot be shown.

…A search for Linyi (临沂), the now-infamous prefecture in Linyi where Chen was held under house arrest for 19 months, brings a warning from Sina Weibo that results cannot be shown.

…A search for the word “embassy” (大使馆) brings a warning from Sina Weibo that results cannot be shown.

…A search for a shortened form of “U.S. embassy” (美使馆) brings a warning from Sina Weibo that results cannot be shown.

…A search for the word “consulate” (领事馆) brings a warning from Sina Weibo that results cannot be shown.

Someone really doesn’t want netizens to know that a person named Chen or any blind person in the world might or might not be at the US or any other country’s embassy or consulate. Do the censors really think so little of their fellow man’s ability to find news?

The short answer: yes. And that’s a reflection of their stupidity, so plainly evident that to say anything more about it would be to waste your time, and mine. So, enough talk. Over the next 10 or so hours, we’re going to continue asking where Chen Guangcheng is, because despite what the authorities want you to believe, he can be shown — he can be shown in Yunnan province, and he can be shown in Nanjing, and in Chengdu, and Wuhan. We’ll show him in Tiananmen with his face superimposed on Mao’s portrait if we have to. Just look, China: he’s right the fuck there.

7 Responses to “Where Is Chen Guangcheng Right Now? Maybe Beijing”