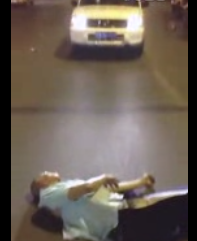 Will the UK media be waiting at the airport to greet the British “attempted rapist” (or molester, drunk lecher or whatever you believe) – or will he slip away into obscurity?

That’s what we’re left wondering as the book closes on one of the ugliest chapters in foreigner-China relations in recent months, which has included a 100-day foreigner crackdown, a wave of anti-foreigner nationalistic sentiment on the Web, a hilarious flame war between an American blogger and a dim-witted CCTV host, and a vacant first seat in the cello section of the Beijing Symphony Orchestra.

The bald Brit who trailblazed all this clusterfuck? Having spent the last 20 days under some sort of administrative detention, he is now being quietly deported back to Britain. Multiple seats were reserved on multiple flights from Beijing to London today, and as we speak, it’s likely he is on the 1:30 pm Air China to Heathrow.

Here’s what we’ve heard through the expat grapevine: 1) He’s a mid-20s British passport-holder of Egyptian descent; 2) he has a brother who’s lived in Beijing for several years; 3) er… that’s it. It is beyond surprising that in this day and age of human flesh search engines and wall-to-wall media coverage – no fewer than three dozen media outlets in this country alone have reported this story – we still don’t have so much as a name.

According to a foreign lawyer in Beijing, authorities had 15 days to take the next step in the Chinese legal process, but “if the individual being detained would admit to an infraction of the Chinese law or administrative regulations, he or she could accept whatever punishment could be levied against him or her for that violation.” That appears to be what happened.

Under English law, the penalty for sexual assault (the crime for which we thought he was being charged) of this sort – i.e. where there was “contact between the victim’s genitalia (naked or otherwise) by a part of his/her body and/or genitalia (same)” – is a custodial sentence of between one and two years, but probably a year in prison (suspended for six months) if this was a first offense. He would almost certainly be placed on the Sexual Offenders’ Register (SOR) at the judge’s discretion (lawyers, please correct us). Being drunk is not considered a mitigating factor.

The SOR is a database of those deemed at risk to the public and requires offenders to annually provide full registration details of their identity and inform the police within three days if there are any changes in their name, address or vehicle details, and if they intend to leave the United Kingdom for a period of three days or more.

Prior to the video that overnight made this guy the most hated foreigner in China – and there always was and will be pretty stiff competition – an eyewitness claims he was also seen on the subway jabbing his groin at about five young women and asking, “Was it OK?” Outside the Xuanwumen station, he apparently asked an 18-year-old woman the time before following her to a flowerbed, where he allegedly proceeded to molest her. And no, it was not OK.

We’ve heard all manner of responses to this video – the editing and content of which, it has to be said, raised a lot of unanswered questions – ranging from batshit conspiracy theories (from people we’d usually consider quite rational) to jingoistic fury and calls for calm. Now we wait to see if this story has another chapter: his flight is scheduled to land at 5:45 pm BST (12:45 am here).

Presumably the man will be met at the airport by the relevant British authorities to determine what – if any – risk he poses to the UK public. Perhaps we might even get some sort of explanation.