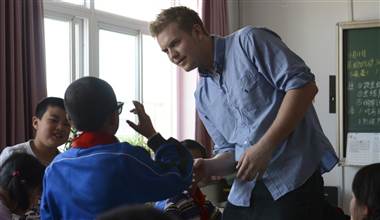 MSNBC has a China blog called “Behind the Wall,” and as the name might suggest, it targets an American audience that may not be as familiar with China as those of us here on the ground (“behind the wall” sounds a lot like “other side of the world,” i.e. a throwaway cliche one scribbles on the back of a postcard). There is a need for websites like Behind the Wall, I suppose, because I do sense a generally healthy interest in China from my friends back home. A problem arises, however, when the people covering China don’t know the country, and try to package stories into a neat, easy-to-consume “China Narrative.” You recognize it when you see it, even if it’s often more subtle than “pollution is bad” and “they eat dogs there!” (though it’s also often not more subtle than this, unfortunately). The China Narrative is the equivalent of media discrimination, or prejudice — journalists would prefer the softer word “bias,” but don’t be fooled: sometimes, editors just don’t care about representing reality; piquing a reader base is so much easier.

MSNBC’s latest post was about teaching English in China. It was exactly the car crash you’d expect. It begins:

Speak a little English and are willing to relocate? Well, you’re probably qualified to be an English-language instructor in China.

As long as you are white, that is.

The story centers around the experience of two prospective teachers, Mike Lee and Will Evans. Lee is the Asian one, fresh off the boat, apparently still unaware that China and America are, in fact, different. He got rejected for a teaching post because, as he was told, “Unfortunately, parents of our students don’t really want someone Asian to be teaching.”

Instead of feeling gratitude at being given an honest reason, his reaction was:

“I was shocked – back home this wouldn’t be acceptable,” Lee told NBC News. “I’ve never been discriminated (against) in that way.”

A post by Vogue on a popular online forum and classifieds site, The Beijinger, explicitly spells out the phenomenon:

“In Beijing this is the general pecking order in terms of a company’s recruitment (by Chinese managers):

Oh, but what about white British who’ve lived in Nebraska and speak Standard American English, but also understand the difference between Doritos and chips? Would they bump White Canadians to 1b? And why is it that White Americans rank above White British but Black Americans and Black British are on the same level? Hmm, Vogue? Care to explain yourself?

The discrimination comes, Evans said, because Chinese parents simply do not believe a non-white person can possibly be a native speaker.

Will Evans, I’m going to go ahead and assume you know this. I’m going to assume the journalist who paraphrased you just doesn’t care that you’re being made to look like an idiot. Because you, Will Evans — like everyone in this type of story — are secondary to the almighty Narrative.

“It makes you feel like crap,” said Lee. “We all came here on the same boat, at the same time, looking for the same opportunity. I didn’t know the color of my skin was going to be an issue. I find it weird to be discriminated against for being Asian, while I’m in Asia.”

I’m going to ignore the ways in which that quote is askew and get on with it.

Despite all the above, what do you suppose the dumbest part of the article was?

In China, English teaching is a whites-only club

That’s right, the headline. Just had to be, didn’t it? It’s so nice to see MSNBC chose to avoid generalizations in its article about the negative effects of generalization.

19 Responses to “Naive Or Dumb? MSNBC Tries To Make A Thing Out Of China’s English-Teacher-Hiring Practices”