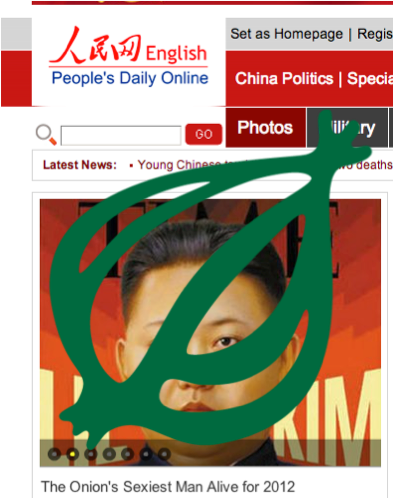 Earlier this year, I gave a lecture to high school journalism students in China about the importance of citation, spending a good 10 minutes on the how and why of it. This may or may not surprise you, depending on whether you read Chinese publications and/or crappy blogs, but sourcing is often optional here; what’s already been published is considered in the public domain, as incontrovertibly factual as, say, “China is a developing country with 5,000 years of history and 55 ethnic minorities.”

But why is sourcing absolutely necessary? Set aside ethics for the moment — I argued to the students that it was a potentially face-saving move, and showed them, incidentally, an example from Western media.

In April, MSNBC, E! Online, Mail Online, Hollywood Reporter, etc. all fell for a satirical quote attributed to China’s State Administration of Radio, Film and Television, and embarrassed themselves precisely because they ran the quote as fact, failing to cite its origin. (In other words, these outlets did one less thing than People’s Daily, which at least cited “The Onion.”) A clever Chinese netizen had written on a satirical website that SARFT censored Kate Winslet’s boobs because it was concerned about Titanic 3D viewers “reach[ing] out their hands for a touch and thus interrupt[ing] other people’s viewing.” The quote eventually found its way to director James Cameron, who told it to Stephen Colbert (“This is true, you can’t make this up,” he gushed). So for everyone commenting that the Chinese have no sense of humor and don’t understand satire, please remember: the Chinese successfully trolled James frickin’ Cameron.

Citation: it’s important. I bring this all up because Alexa Olesen’s latest piece for the Associated Press (AP reporters must feel like they’re dancing through sprinklers, thus has the pap of a normal China day been spiced by state media’s wonderful gaffe) has revealed how The Onion came to appear, under a Communist Party paper website headline, as straight news:

Hong Kong media picked up the piece by U.S. satirical website The Onion a week ago while explaining to readers in Chinese that it was a farce. But from there, it jumped over the Great Firewall and landed into the official, irony-free Chinese media. [Ed's note: The Onion used to be blocked in China, but not anymore.]

When Hong Kong’s Phoenix TV website, ifeng.com, ran its story on its fashion channel on Nov. 21, the story’s second paragraph clearly stated: “The Onion is a satirical news organization.”

But, when state-run Yangtse.com picked up the Phoenix piece a few hours later, it had morphed into straight news. The piece never mentioned that the original was a joke, instead plucking comical reader comments attached to the Phoenix story and running those.

If only Yangtse had heeded ifeng.com’s disclaimer, or sourced them, assumedly People’s Daily would then have found the ifeng.com article, and all of us would have been deprived of the glory that is Kim Jong-Un on a horse.

PD’s editor, Wang Miaomiao, told AP that she was not worried about the mistake:

“Even if it was satire, the report itself was true. The content is not made up. Also, we have to go through a procedure to take something down from the website,” Wang said. “In addition, it is not a fabricated report, and it does not jeopardize society.”

If Wang sounds somewhat defiant, good for her. After all, People’s Daily cited The Onion, and as we’ve mentioned before, The Onion has netted quite a few bigger fish, including the New York Times.

In the coming days, as your friends forward you Facebook messages and emails saying, “OMG, the Chinese, they totally don’t get jokes!,” maybe gently remind them that Chinese media was never supposed to get it? And that, well, regarding this story, there’s a more egregious lapse in editorial judgement…

Have we mentioned it before? KIM JONG-UN, ON HORSEBACK, IS EXTOLLED IN A 55-IMAGE SLIDESHOW. Why People’s Daily is continuing to apotheosize the dictator of the most repressive regime in the world, in any other context, would be the lede. I suppose it’s not very funny though.

UPDATE, 5:11 pm: You know what you can’t make up? The fact that People’s Daily, in April, pasted a China Daily article onto its website headlined, “Fake news is a real problem,” addressing James Cameron and the episode outlined above. (Thanks to Austin Ramzy for bringing it to our attention.) This is a real excerpt:

Meanwhile, members of the public need to think before they forward fake news and the press and government need to respond more quickly and be more transparent.