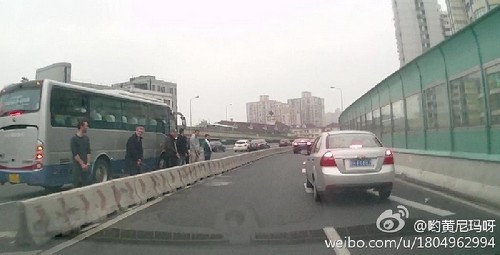 This message on Sina Weibo about six Danes pissing in Shanghai:

A group of laowai collectively pee on a Shanghai overpass, while smirking!

Can only say __ doesn’t have national boundaries! Please fill in the blank!

What are we getting at, here? Not many things know national boundaries, if you think about it. There are just nationalists who insist on said boundaries.

Ah, but this post isn’t about -isms. It’s about pissing. Tsingtao as diuretic. Coffee if you need No. 2. The taboo of daring to be human in the age of social construct. Kidney pain with an element of blank. Blank — fill it in, you goddam primates.

UPDATE, 10:42 pm: Police are investigating the incident, according to Shanghai Daily.

The driver of the bus carrying them told police the men forced him to stop and nearly caused an accident.

…The driver of the tourists’ rented bus, surnamed Bian, was found by police from surveillance camera footage. The driver said he was driving a group of Danish tourists back from the Audi International Circuit racetrack in suburban Jiading District to Zhaojiabang Road in Xuhui District about 4pm on Saturday when the incident happened.

Bian said they forced him to stop, so he tried pulling over along the thin median.

“They drank too much and wanted to urinate,” Bian told a local TV news report yesterday. “They dragged my steering wheel and I almost hit other cars.”

UPDATE, 3/28, 2:57 pm: It looks like these laowai aren’t going to be punished, but, incredibly, the bus driver might be.