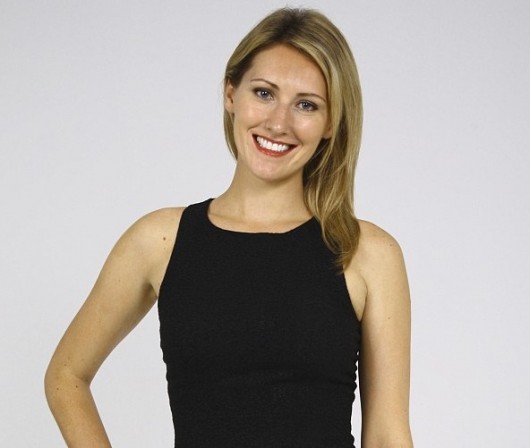 Xinhua host and moonlighter for the Daily Mail’s venerable China Bureau Nikki Aaron has been blissfully peddling the British tabloid yarns of her “China adventures” for the last few months. All well and good.

Here’s her latest, on dating, a subject she has visited before. The extremely confessional tone of the Mail piece begs the question: who is Nikki Aaron? On her website, she describes herself as “a versatile news anchor and TV presenter with global network experience… Nikki co-founded MetroStyle bilingual magazine in 2010.”

Here’s more, from an interview with – and apparently this actually exists – a publication called Nee Hao magazine: “I’ve been quite successful in the sense that I run my own magazine and work as TV presenter for a respected news agency, but I worked my ass off for 6 years… Xinhua is the state-owned News agency in China, and quite an honor to work for.” [My emphasis]

In fact, Aaron has been giving regular interviews to the press back home about her “high-profile position” in Beijing. Here she is in the Derby Telegraph talking about fame on a visit to Hong Kong: “I was secretly hoping someone might point me out, considering my show is aired on the giant screens at Hong Kong airport, as well as on the subway trains there. But alas, nobody did!”

In Nee Hao again, discussing her work: “I’ve become a bit of a China expert over the past two years… I won an award for the best documentary last year, in which I travelled to Qinghai province (bordering Tibet), where I met and interviewed the family of the Dalai Lama, visited the birthplace of the Dalai Lama, and explored Tibetan Buddhism in China. It was quite a ground-breaking programme.”

Unhappily, readers, future employers and little children should be aware that, for a select few, working for an “honorable” news agency comes with a few strings. At least one of which includes peddling hardcore Chinese propaganda on “somewhat” sensitive issues:

In the above, released in March, Aaron’s professional-sounding voice and accent are used to lend considerable authority to a 15-minute Xinhua documentary on a channel called “China View,” entitled Life in Flames: The Story Behind Tibetan Self-Immolation. (The program might have baffled regular Xinhua viewers: up until that point, the broadcaster had completely ignored the 100 or so self-immolations which have occurred in Tibet over the last year or so.)

The documentary purports to take “a closer look at what’s really behind these extreme suicides.” Indeed, close your eyes and it could be the BBC, so perfectly has Aaron has captured the strange cadences and emphases of British news voiceovers. (In another, earlier piece of Mail gibberish, Aaron says she “landed” the Xinhua role as “a TV news anchor, reporting to a global audience of 2.5 billion” [again, my emphasis; it’s doubtful Xinhua TV pulls in 2.5 of anything].)

Despite the production value, Life in Flames is thinly sourced, controversial and perplexing, to say the least. It is a relatively recent move for Chinese media to use presentable Caucasian foreigners to add credibility to news reports – one which should probably be viewed with some skepticism (foreign journalists — such as Gady Epstein, who called Life in Flames “remarkable propaganda” — are rarely even allowed in Tibet).

That said, it is not without precedent: at last year’s Two Sessions in November, Andrea Yu, a credentialed Australian reporter for something called the Global CAMG Media Group caused a minor sensation with her apparent ability to consistently get the attention of Chinese politicians at press conferences. In fact, Yu was a Party shill, planted by a company with a majority shareholding in Beijing, to ask pre-scripted softball questions. The ensuing controversy saw Yu being dragged through the grinder before ending up down an absolute wormhole of soft-power failure.

Sceptical of Aaron’s own “reporting,” we contacted Robbie Barnett, Adjunct Professor of Contemporary Tibetan Studies at the University of Colombia, to ask whether our conclusion was fair. His answer is reproduced with permission here:

This piece is problematic as a piece of journalism, including in the smallest details. The topic that it discusses concerns repeated and tragic loss of life in bitterly contested circumstances, and the ponderous approach displayed here seems a provocative choice for such an issue.

An editorial decision has been made to support the Chinese government’s current position, and it cites only that view. So this is more an advertisement than news, possibly a paid one. There is no disclosure of this station’s affiliation or adherence, though it is evidently not an independent body, and its use of confessions by serving prisoners is not noted or explained. Its allegations about US radio broadcasts are incorrect: according to my knowledge, they do not refer to immolators as martyrs. The presenter completely mispronounces all the Tibetan names, suggesting a lack of basic research or of concern. The role of the presenter in fronting this and the choice to use a stentorian speaking style can be judged by viewers for themselves.

With foreign media now battling unprecedented restrictions on their work in China (Bloomberg, Paul Mooney incident, etc.) and citizen “Big V” journalists ruthlessly monitored, why is a British journalist fronting hardline CCP propaganda for, in her words, “a respected news agency [that’s] quite an honor to work for”? Given that Aaron is, in her own words, a “China expert,” is she so naïve as to think that her Xinhua work counts as actual, real journalism – and if so, what does such credulousness say about her reporting abilities? Or does she stand by the video, in which case she has some serious questions to answer.

(Counterpoint: for a more sympathetic take on this dilemma, see Eric Fish’s remarks about Andrea Yu, which are still very relevant here.)

Those, like Aaron and Yu, who pursue payment, easy government relations and Mail clicks in exchange for values and professional integrity should ask where it leads in the end. First Xinhua, now the Daily Mail. Where next – the Pyongyang Bugle?

14 Responses to “Blonde Ambition: How Xinhua Used A Foreign “Reporter” To Sex Up Its Propaganda”