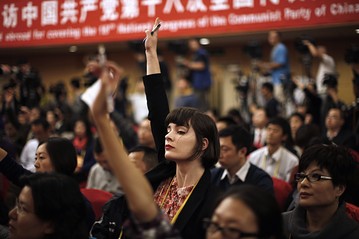 Yesterday, while writing about an Australian reporter who had become somewhat of a Chinese Internet star because of her Mandarin-speaking ability, I was most struck by something she said in English. At a press conference inside the Great Hall of the People, she mentioned she was representing “Global CAMG Media International.” I googled that phrase and found no results on the first page. The closest match was “CAMH,” which is completely different. That should’ve sent up a red flag, instead of a yellow one. But this was still the early stages of the story, and the news seemed to be the question itself, not the identity of the questioner, so I went ahead with the post.

Well, one short day later, the focus is now squarely on the questioner. Her name is Andrea Yu, and it turns out she’s far from a journalist. She was first tracked down by China Real Time Report, to whom she admitted that she gets called on at press conferences because “they know my questions are safe.” Hmm. If your eyebrows aren’t yet raised, please turn your attention to her second interview, with Stephen McDonnell of Australia Broadcasting Corporation (via Shanghaiist), who cut her a lot less slack. Ms. Yu, meet a journalist:

STEPHEN MCDONNELL: Is it a little disingenuous for you to be up here I suppose with the appearance of being an independent international journalist when really you’re working for a Chinese company?

ANDREA YU: Yes, that’s a good question. It is interesting, and a lot of people have asked me about that. The fact is, I chose to be employed by them, and I’m representing their company.

So when I ask questions in press conferences and anything like that, I’m representing the company as well as representing Australia.

STEPHEN MCDONNELL: The company though, it’s controlled from Beijing, right?

ANDREA YU: Ah, well we do have a head office in Melbourne, so…

STEPHEN MCDONNELL: The majority shareholding is from Beijing – that’s right, isn’t it?

STEPHEN MCDONNELL: Because I mean you could say that it’s as if the Chinese government has brought you up here as a sort of friendly journalist to essentially ask itself questions that it likes about its own performance.

ANDREA YU: Yes, you could say that, but you could only say that if you knew who my company was and we are fairly, I would say, not very well-known at this stage.

STEPHEN MCDONNELL: Here’s the Chinese government, they’re inviting someone up here – they know that you’re working essentially for them, and you’re coming up here and asking them questions about their own performance. Isn’t that right?

ANDREA YU: I really don’t know if I can answer that question accurately, the way you’re wanting me to answer it. I know you’re looking for a certain answer here, but…

ANDREA YU: No, my answer is that I think it’s a very large system and I honestly don’t believe that people within the Chinese government knew beforehand who I am and who I’m working for.

STEPHEN MCDONNELL: But is it real journalism, what you’re doing?

ANDREA YU: Um, I’ve only just started. I’m very new to this, so I’m learning as I go.

STEPHEN MCDONNELL: So you’re not quite sure if it is?

STEPHEN MCDONNELL: You don’t feel though, potentially, that you’re being used by the Chinese government to show that there’s something going on that really isn’t happening?

ANDREA YU: It’s something that I think a lot of foreigners have to think about when they come here. It’s also very difficult because…

STEPHEN MCDONNELL: But what do you think about it though? Do you feel that you’re being used in that way?

This goes on for a little while, and her answers don’t get much better, nor do McDonnell’s questions get easier. What we have here, in Yu, is a mercenary who embarrassed the wrong profession. It’s one thing for a Chinese company to hire a “white face” to do quality control in a factory out in the boonies, where no one will ask questions. It’s another for the Chinese government to employ a “white face” to lob softball questions at powerful people who deserve to be held to account. Political reporters — particularly foreign correspondents — are too cynical, too bitter, and too intolerant of bullshit to give fraudsters like Yu a free pass, and if they can’t ask questions of Chinese politicians, they’ll find other outlets for their withering inquiries. So it is that Ms. Yu, who by all accounts seems like a decent individual, had to be dragged through the grinder.

You know what, though? With all the publicity that CAMG has gotten, googling “CAMG Media International” now actually turns up a result. Its main office is at Jianguomen Wai, just down the street from the Great Hall of the People. Here’s its website, and the About section:

CAMG is a media star emerging out of Oceania, implementing media and cultural projects covering the entire Asia -Pacific region.

CAMG’s main area of development is the integration of media resources in Asia and Oceania, producing high-quality content for audiences of different countries in line with the local audience listening habits and tastes

Since their establishment in Melbourne, Australia on September 12, 2009, CAMG Media Group has been committed to building a cross-cultural bridge between nations and encouraging international trade. CAMG’s mission with their partners is to develop effective ways to facilitate cross-cultural exchange and to build well-known media brands.

After more than 2 years of development, CAMG Pty., Ltd. has built a strong international team of media professionals, using the most advanced and up to date hardware and facilities. Currently, the company has subsidiaries registered in New Zealand, Thailand, Sri Lanka, Indonesia, and Nepal, as well as in a number of other countries.

These last two years of excellent growth are only just the beginning. CAMG is continuing to grow and step-by-step is building a world-class media brand.

UPDATE, 11/15, 12:26 am: Just saw that Eric Fish of Sinostand wrote about this too. I offer it here, including the following excerpt, as a counterweight to my sentiments.

Some of my experiences and those of several acquaintances at Chinese companies (not just media) were just like this. It’s not as if you’re told up front what your real job and unethical responsibilities will be. It comes in ways that aren’t immediately obvious and in steps so small that it’s easy to descend into something you’d never intended. What seem like opportunities (ie – covering the biggest political event in China) are in fact situations where you’re being exploited. By the time you look around and realize what you’re doing, you’re in too deep and it’s hard to climb back out without seriously disrupting your life.