A comprehensive report on the Australian Broadcasting Corporation’s website by correspondent Stephen McDonell explains how he’d headed down to dirty dawg bar Dos Kolegas for some beery r ’n’ r following a stint in sunny Ukraine. It was at this point that Knacker turned up with some “small containers” – which didn’t contain Welcome Back gifts. 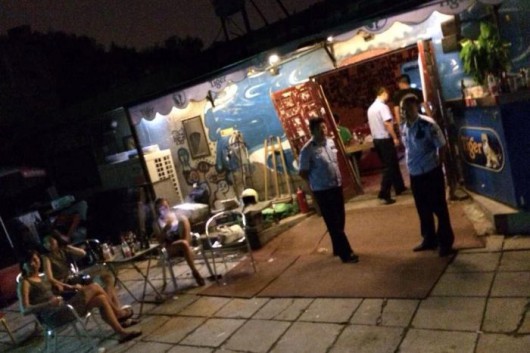 This phone camera image, via ABC, shows the scene at Dos Kolegas two weekends ago

“With toilet doors open, police watched as we gave samples one by one. Women too had to squat with the toilet door open. A police woman would stand in the doorway and partially block the view of those who walked about in front of the stalls”

It got even worse for those who flunked out:

“[They] were taken outside the bar and made to sit on the ground with their hands tied behind their backs – heads down. Some had their mouths taped closed”

For the sorry bastards who failed what McDonell identified as a marijuana test – who included at least one dazed FOB tourist – two weeks of detention await, followed by deportation: “No lawyers. No right of appeal. No telephone calls allowed.” (Loyal rag the Beijinger earlier cheerleaded the arrest of drug dealers as “welcome news to the vast majority of foreign residents of the city who choose to live within the letter of the law.” So, look forward to their strongly worded editorial regarding probable cause and due process soon)

Naturally, the expat rumor mill is now in overdrive and the theories flying: did Dos Kolegas not pay their maintenance fee? Is this part of the wider crackdown that has seen various hapless stars – including the son of CCP enthusiast Jackie Chan – busted for personal use, while their hapless management sign letters effectively banning any naughty artists from recording with them (quick pause while one pictures the history of Western pop sans narcotics: it’s 40 blissful years of One Direction).

The establishment targeted – and some were quick to link the raid to a spot check on Dada and others in February, under the aegis of a routine examination of “fire extinguishers” – attracts an overseas clientele.  The aforementioned sweep on dealers, meanwhile, occurred in an area, the Gongti West strip, best known for nightlife purgatories like Baby Face and True Color (can’t specifically name any others, as I’m not a patron) and commonly frequented by thundercunts of the Li Tianyi persuasion.

As there is currently a national drug crackdown you may have overlooked among all the other crackdowns, it seems more likely this is a raid based on specific information, such as a suspect grassing up his/her mates for a lighter sentence. Wrong time, wrong place. Can happen to anyone, like the long-term foreign business owner who happened to be sharing a sofa with a woman when her apartment got raided some months ago. He was gone within days.

A wider issue is the use of on-the-spot urinalysis, which the American Civil Liberties Union (I know – don’t laugh) has called “intrusive… degrading… an invasion of privacy… [it] reveals not only the presence of illegal drugs, but also the existence of many other physical and medical conditions,” adding the tests are subject to “human error [and] false positive results.” And that’s tests conducted under laboratory conditions – which I submit that the public bathrooms of Dos Kolegas do not at all resemble.

Urine samples commonly test for “for 31 different metabolites caused by marijuana, 4 caused by cocaine, 3 caused by opiates, 1 caused by Phencyclidine, and 5 caused by amphetamines.” God help you if you just returned from a fact-finding trip to Colorado. False positives can include Ibuprofen for marijuana, decongestants and diet pills (amphetamine), certain antibiotics (heroin and cocaine) and poppy seeds (opium and heroin). Everyone thing you wanted to know about urine tests but were too baked busy to research can be found here.

Police allegedly explained these methods thus: “[we] could not appear to be showing favoritism towards [foreigners] because it could be misconstrued as corruption.” So, foreigners may expect the same application of the law and their rights as Chinese – i.e. at the unaccountable whim of the state.

More worrying, at least from one point of view, was the tentative suggestion that the Thought Police may be turning their attention to what we say – or more specifically, write – as per this tweet by Kunming resident, and co-founder of the East By South East blog, Brian Eyler:

At publication time, we’d yet to hear back from Eyler regarding the provisions against “online criticism” or  criticism of the government (in lieu of an update, Eyler says in this thread that the interviews occurred in 2014 in Kunming, and were more of a “lecture”).

[UPDATE:] Eyler says the interview lasted three minutes: “Basically a high-ranking PSB officer sat across the room from me puffing on a cigarette and rattled off a bunch of ‘don’t dos,’ including the ones I posted on Sunday. He mentioned no attending protests and no doing drugs… He didn’t mention blogging, Twitter, WeChat or anything specific – just something about 网上写负面的东西 [“writing negative things online”].

“The interview only applies for foreigners applying for their long terms visa for the first time in a new locality… Could have been directed at me, can’t rule that out, but I have nothing to suspect that the blog has fallen onto the local government radar even through our blogging about the PX protests last year.”  Beijing Cream also  contacted other respondents for details of their experiences. Nothing they reported rang any alarm bells. [ENDS UPDATE]

In Tianjin, where police chief Wu Changshun was incidentally detained on corruption charges earlier this month, expat Matthew Stinson said he’s merely been occasionally required to attend the Exit-Entry Bureau in person, where they “sometimes remind us not to promote a religion.” Eric Fish, an American writer who hosts the China Hang-Up podcast and has lived in Nanjing and Beijing, said his experience amounted to little more than a standard lecture to fellow teachers. “Most of it was just safety stuff and reminding us to register,” Fish replied, stating that this was back in 2008.

“The most political thing he said was to not conduct religious activities… When I got a student visa in Beijing at Tsinghua, a cop came and gave basically the same lecture to an auditorium full of new students,” Fish added. Students at his Tsinghua journalism program “had to sign a pledge not to do any reporting while they were in China before they were issued their [student] visa.” (My own experience, in 2009, amounted to turning up at the Bureau in person because “they want to have a look at you,” as per the advice of my friendly HR representative. “He likes you,” she whispered later. I felt like a prom queen.)

Amid the obfuscation and anger is an unfriendly reminder that we’re all living in a police state – albeit one where the cops would probably much sooner do nothing than spend their days being proactive.

Trying to read the tea leaves too much, particularly when linking the arbitrary policing of foreigners to wider issues of central administration, is usually an exercise in futility. Best to view local policy in China as like a Tom Friedman metaphor: it may not make much sense to begin with, and even less so later, but it’s the one with the Pulitzer and column in the Times, so we have to suck it up.

CORRECTION: An earlier version of this post incorrectly spelled the surname of Stephen McDonell as McDowell.

21 Responses to “Foreigners Told: Stay Off The Drugs – And Twitter?”