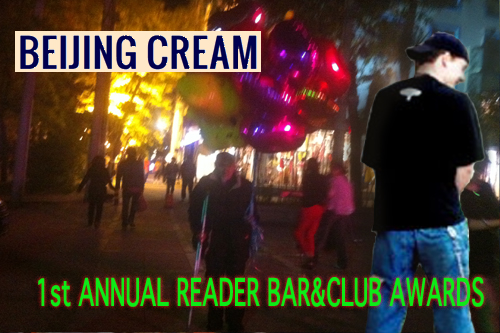 Two days ago we introduced the 1st annual Beijing Cream Bar and Club Awards (image credit Katie), with 22 questions divided into five categories. Yesterday, Piper Fisco and E examined the first two of those categories, Dross and Repugnance, and earlier today, Kevin Reitz wrote about the Alcoholism category. Kevin purported to not be an alcoholic though; this evening’s columnist makes no such claims.

At the request of my good friend Tao, I am taking precious time out of my busy day of multiple failed attempts at finding Season 2 of Game of Thrones online while at work to bring you my reasons for which bar or bars should be named “best of” under the category of ALCHOHOLISM in the currently running Whatever Competition it is that Tao’s Cooked Up For Us Now (say that ten times fast). But before I begin, I feel it necessary to give my expert opinion on what it means to be an alcoholic.

Being Irish, Scotch, English, Welsh, German and just a wee bit Austrian, drinking runs in my blood. Add to that the fact that I’m a US Marine and you pretty much already have a perfect recipe for alcoholism. But what does that mean? Honestly, I don’t know. So shut the fuck up, stop asking so many damn questions and do another car bomb with me!

OK, hold off on the car bomb, we have more pressing issues at the moment. Now, if you’re thinking, “What could possibly be so fucking important as to hinder my impetus on a perfect night of binge drinking?” then I need not explain what it means to be an alcoholic. However, if you fall into any other category (to clarify, that means you feel like it’s okay to hold off on the car bomb), then please read on. Otherwise, you can skip to the next paragraph.

(Oh shit, its already the next paragraph. Maybe it was a good idea to hold off on that car bomb after all. Oh well, just keep reading). So basically, being an alcoholic means taking every opportunity to enjoy a good man soda, as my buddy Brent so affectionately refers to beer. It doesn’t have to be beer, though. It could be whiskey or tequila or even a cosmopolitan if you’re a girl. You get my point. But there’s more! It’s not just that you enjoy the drink. In fact, you may not enjoy the drink at all. It might taste like a Long Island Iced Tea from Wu Bar in Wudaokou, which, for those of you who don’t know, tastes like shit. But you drink it anyway. Why? Because when you went there on Thursday, the Chinese girl you went with got five tickets for free drinks but she’s a cheap date and only needed two of them so she ordered drinks for you too. So they were free. Which meant the hundo in your pocket was gonna be just enough for you to get eight more Tsingtaos and have enough for a cab ride home. That and the Long Islands there do have a fairly remarkable ability to get you buzzed. So anyway, being an alcoholic means you pretty much never say no to alcohol. (Unless its baijiu.)

Let’s take a gander at the questions posed under the ALCOHOLISM category of this… competition thing. First up: Most Reliable Place to Get Shitfaced, Followed by Overwhelming Regret For Two Days. Wow, this is a tough one. The choices are Juicy Spot, Nanjie Bar, Pure Girl, Salud, Smugglers and Tun. Now, ya see, all of them are good choices because the liquor at all of these places is fake and will give anyone a hangover fit to beat Jesus, provided one were to consume an appropriate amount. But ya know, I’m gonna have to go with Juicy Spot on this one. Because when you drink yourself to oblivion at Juicy Spot, you stand a pretty fair chance of being dragged back to the lair of some lagoon creature. Or worse yet, you bring her (or him, as the case may be) back to YOUR place. THAT is not a fun thing to deal with when you have ten minutes to get to work the next morning.

Question 2: Safest Place to Throw Up. Honestly, in this Marine’s not-so-humble opinion, any place is a safe place for alcohol poisoning. But as far a nice bathrooms go, I’ll have to say Punk/Mesh. I only say this because I almost went to LAN Club once, but the entrance fee was, like, 150 kuai, so I went to Juicy Spot instead, where I proceeded to get alcohol poisoning and ended up being dragged back to a lagoon creature’s lair. So I’ve never had the opportunity to destroy my liver in LAN Club. I’ve never been to Enoterra either, or if I have, I don’t remember. And believe it or not, I’ve never used the bathroom at Migas before, but I do like the giant egg things. Might be nice to get falling-off-the-world shitfaced and pass out on the bed-like things inside, but I think I might advise against the spewing. Never heard of Flamme. I’ll remedy that tonight and report back later. For now, the bathroom in Punk is the place to get obliterated and loose spew.

Question 3: Worst Place to Go if You’re Feeling Mildly Suicidal. Ok, let’s see here. Our choices are: Brussels, Glen, Great Leap Brewing, Nashville, Siif. To be honest, I’ve never been to any of these places. They all sound depressing, so maybe any one of them is a good one to steer clear of if you don’t actually wanna voluntarily check out early. But ya know… I’m gonna have to go with Nashville on this one. I mean, really? There’s a bar called Nashville in Beijing? C’mon, dude! I get that you’re homesick, but for fuck’s sake, give me a break. Moving on.

Question 4: Most Likely to Physically Injure Oneself. OK, if you’re being a good little alcoholic, then you’re likely to injure yourself no matter where the fuck you go. But let’s be real here. The fucking stairs at Haze are ridiculous. I’ve almost killed myself going down the fuckers sober. It’s a goddamn miracle I’m here writing this article right now. So there you have it. The stairs at Haze are murdering mother fuckers!

Question 5: Oh, there is no question 5. OK then. That’s it. These bars should get their respective recognition because I say so. You have the right to have opposing opinions. And I have the right to punch you in the fucking mouth if I disagree. That having been said, enjoy your evening, don’t drink too much (or do, I don’t fucking care) and be safe. Good day to you, Sirs and Lassies.

Scott is a certified alcoholic living in Beijing. He can be found onWeibo or reached at scott.grow@gmail.com.

You can vote for the bars in the Alcoholism category and the four others – Dross, Repugnance, Meta, and Sex — right here: