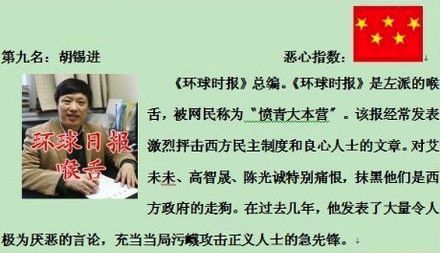 Despite censorship, the Chinese Internet is still capable of producing gem. On Sina Weibo, an Anhui-based user, @每周评论 wrote a short-lived post that identified the “10 Most Horrid People of 2012.” Hong Kong-based China Media Project tells us the post was deleted “sometime before 12:05 p.m. yesterday,” but not before they were to extract and translate the list. Coming at No. 1: Sima Nan. But it’s No. 9 — Global Times editor-in-chief Hu Xijin — who has at least one of us cackling with joy.

“That made my day,” said TAR Nation. If you agree with him, you might enjoy:

You’re advised that the above columns may contain R-rated language.