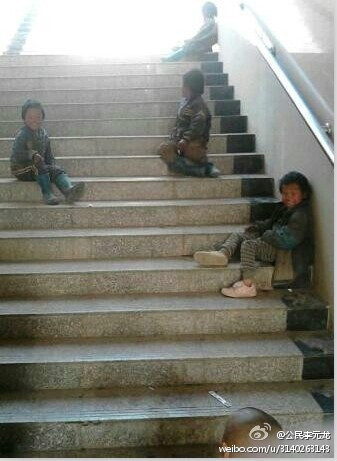 Sina Weibo user @公民李元龙 may have posted the first photo of those five Bijie children who died of carbon monoxide poisoning in a trash bin last week, and it’s perfect. Look at that light. In a post that was published yesterday at 9:18 pm (884 forwards, 322 comments so far), @公民李元龙 writes:

A miracle, I obtained a picture of those five children who died of suffocation. Apparently it was the day before the children died, using a phone at Bijie College, taken on the stone steps of a highway underpass just 200-some meters from the place where the children died.

News of the children’s deaths continue to circulate, with Xinhua writing an editorial yesterday calling the incident “a wound in society.” Many netizens have compared the story to Hans Christian Andersen’s “The Little Match Girl,” about a poor Danish girl who sells matches on the street. The Bijie boys — so-called because they lived in the poverty-stricken coal-town of Bijie, Guizhou province — died of carbon monoxide poisoning from the matches they lit while trying to stay warm inside their dumpster. Notes Wall Street Journal:

“When I was little, the study topic for ‘The Little Match Girl’ was: Understand the horrible tragedy of the little match-selling girl’s death on the streets on New Year’s Eve and how it reveals the darkness of capitalist society,” wrote one Sina Weibo user. “Vicious capitalist society! That’s how we were educated.”

Wrote another microblogger: “I thought the little match girl was something that only happened in capitalist societies. Why this sense of superiority about our system?”

And of course, people are wondering how bureaucrats can strut their wealth when so many people have so little. Via Tea Leaf Nation:

One commentator (@木尔) with more than 40 thousands followers contrasted the death of these boys with the wealthy life led by the Party Secretary from the same city, who the blogger complained has a weakness for luxurious leather belts: “[The cost of] any one of his belts could easily cover many people’s foods and clothing.”

Indeed, the search for a culprit ranged far and wide: Sloppy governance, careless parents and schools, an indifferent community.

…As fairy tale writer Zheng Yuanjie concluded: “Though you left the world in a dumpster, you are not trash. The irresponsible adults are. A child frozen to death means a future frozen to death. Beijing spent 800 million RMB to [heat the city for an additional 15 days this winter], but still did not warm you … please forgive us.”

But poverty simply has a way of being, in any society. It’s always a tragedy; what can any of us do? Perhaps let the story be a reminder for all of us to be a little better.