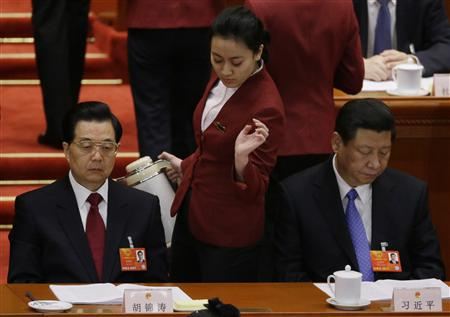 Few will accuse Hu Jintao of being photogenic (note: some have tried), but the above picture takes the cake. By Jason Lee of Reuters, captioned via Yahoo: “An attendant serves tea to China’s President Hu Jintao (L) next to China’s Communist Party Chief Xi Jinping (R) during the opening ceremony of the National People’s Congress (NPC) at the Great Hall of the People in Beijing, March 5, 2013.”

Poor Xi Jinping, who must be wondering if 10 years at the heart of China’s political machine will also turn him into an emotionless husk of a walking dead. We wish Hu Jintao well in his post-political career. There’s still a human being somewhere in there.