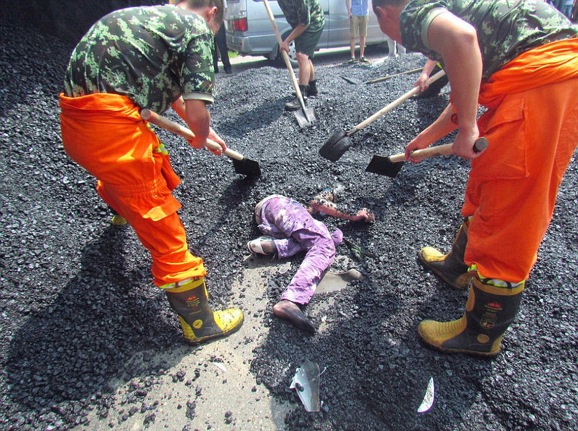 You don’t want to go out this way. Recently, a man on a scooter in Yuhuan, Zhejiang province died when a truck carrying 10 tons of boiling tar tipped over and deposited its contents on him. “‘The bitumen poured out all over the man on the bike. You could smell it burning. There were some terrible screams and then silence,’ said witness Liu Jin,” according to Daily Mail, which continues:

Firefighters needed special heat proof boots as they searched for the biker’s body in the tar, which was being kept at a temperature of 100 degrees Celsius in the truck.

“He was beyond saving. He would have been dead within the first minute,” said an emergency services spokesman.

We’re reminded of a similar accident last month, when a female cyclist got buried underneath an overturned dump truck’s soil. Global Times has this story:

The truck, loaded with soil, was going from north to south at around 5 am, when it overturned at the crossroad of Nanding Lu and Liuxiang Lu, Fengtai district. The deceased, who was riding her bicycle, was buried in the soil dumped from the truck, said the owner of a nearby restaurant.

The witness, surnamed Han, said that he had heard the noise of the accident while he was working. He saw the truck driver crawl from the overturned truck and make a cellphone call.

“He seemed to be around 40, and was slightly injured on his shoulder,” Han said.

Another witness, surnamed Fu, said that the driver did not know the woman had been buried until onlookers told him that two arms were sticking out of the earth pile, which was covered by the truck hood.

So just we’re clear: which death is worse?

We already know to be fearful of sidewalks, which can collapse under your feet and cause you to be boiled alive, and balconies of course, and for the love of God, man-eating and bone-severing escalators, but the new danger is dump trucks? Never bike too close to one. Gotcha.

2 Responses to “Death By Boiling Tar: For Second Time In A Month, Cyclist Killed By Dump Truck”