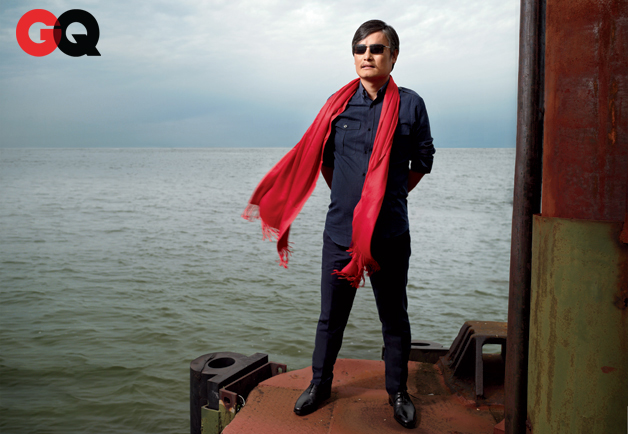 A little more than six months ago, Chen Guangcheng was lost. Maybe not literally — though there’s a chance that’s true as well, a blind lawyer-activist fleeing through the woods of Linyi in Shandong province, then chased via car — but his whereabouts, for a week, was utterly unknown except to a circle of close friends and relevant officials from the US and China. Yet it was this disappearing act that thrust him into the center of international attention, so that he became not just a news story or a symbol of protest (which he already was, with an assist to Christian Bale), but a pop icon who would become recognizable even to viewers of The Colbert Report. Ever since his daring escape from house arrest in May — and eventual departure for New York, where he’s currently residing — Chen Guangcheng has been embraced as a cause célèbre, the ultimate underdog prevailing against a system that somehow could let a blind, ailing man slip through a crack.

Look at him now. Look at him with that red scarf, a whole wide sea of trouble behind him as his now-famous black shades point toward, we’re sure, the Statue of Liberty in New York Harbor. There is the narrative laid out for you, even as the story remains as unfinished as before, with his nephew still in trouble and a new cast of activists facing the same heavy hand and long odds that CGC was fortunate enough to overcome.

But on this Sunday, let us acknowledge that Chen Guangcheng has indeed come a long way, as he recounts to GQ’s John Thompson in the magazine’s Men of the Year issue. Chen is GQ’s Rebel of the Year, joining the likes of Usain Bolt (Athlete of the Year) and Christopher Walken (Badass of the Year). In the three-page story, he talks about the plane ride to the US, and throwing up that first night. He talks about his brother, Chen Guangfu, and nephew, Chen Kegui. He talks about corresponding with Ai Weiwei, and evangelist Bob Fu of ChinaAid.

Do I have any regrets? No. What is there to regret? When I need to analyze a decision I’m about to make, I analyze the options based on my thoughts and opinions. I don’t just blindly make decisions, and this one was thought through. I don’t while away my time with regrets, just like I didn’t worry about danger in China.

Was this the best result? I don’t think so. The best result would be China really realizing constitutional democracy. I think the best result would be going to China or the United States because I wanted to and not because of circumstances. Of course I want to go back. But after a few days, I might want to leave again. I don’t think China can continue like this forever. Even if the government feels like they can disallow me from coming back, they won’t last forever.

Go give it a read. We’ll focus on the other issues in due time.

6 Responses to “Chen Guangcheng Joins Rihanna, Usain Bolt As GQ Honoree, For “Rebel Of The Year””