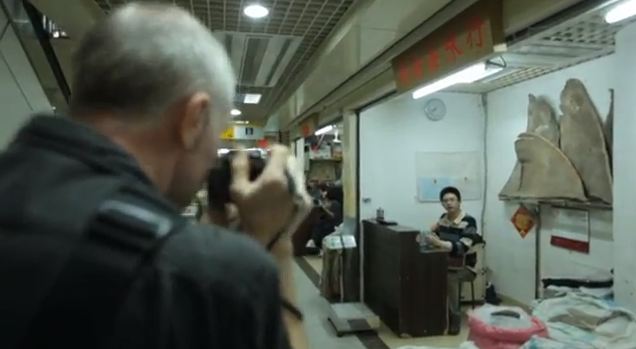 Patrick Brown is a professional photojournalist who has spent the last twenty years of his life documenting all facets of the illegal sale of endangered animals in Asia. Driven by his life’s passion, he has recorded all sorts of travesties committed upon animals for the sake of profit, and compiled a book of photographs called “Trading to Extinction.” He is considered an expert in his field.

When VICE chose to do a documentary on animal exploitation, Brown was a natural choice to be the on-camera lead. A crew followed him to Guangzhou, capital of Guangdong province, as he visited one of the largest illegal animal trade markets in the world…

Like any other tourist. And as a tourist would, he explains the Chinese consumption of endangered animals in terms that are black and white:

What drives the industry is naivety and greed. Naivety in the sense of lack of education regarding what the health benefits from some of these products do.

Perhaps Brown — who lives in Thailand — doesn’t understand Chinese culture very well, and he’s entitled to his opinion, but labeling Chinese “naive” is to adopt a morally superior position in which the Chinese are “children” who must “grow up” and adopt the moral standard of the West.

I wouldn’t expect any journalist to be completely objective; furthermore, I agree that some Chinese’s cavalier, wholesale attitude toward the environment is detrimental. What I don’t agree with is the kind of foreign investigative journalism that encourages ethnocentrism while disparaging its subject, leaving viewers or readers no opportunity to confront related issues within their own society.

To be fair to Brown, he has firmly said that he isn’t an animal activist; he is a photojournalist who wants his pictures to do the talking for him. Other Western journalists, however, are much more direct in their accusations. 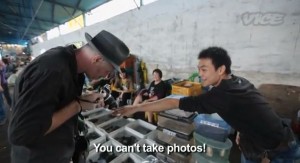 There is another VICE documentary called “Prostitutes of God” regarding child prostitutes in India called devadasi, sanctioned sex workers ordained by a religious temple. Reporter Sarah Harris concludes in the middle of the film that “this religious ritual is just a justification for poor families to pimp out their daughters”; meanwhile, Harris’ interviewees admit that they want to do this job rather than go to school because they want to feed their family the requisite two square meals a day. When explained the origin story of the goddess Yellamma numerous times, Harris flat out rejects it as “never being able to understand it” — you know, someone else’s faith-based beliefs.

In a recent Jezebel story about the immense popularity of plastic surgery in South Korea, writer Dodai Stewart describes the photos of women who have had the procedure as “show[ing] a burning desire to fit inside a very narrow scope of what’s seen as beautiful. It’s not about what’s inside, it’s not about character, it’s about an artificial ideal.” The old stereotype “you Asians all look the same,” in Stewart’s mind, is transformed into “you Asians actually all want to look the same.”

Outraged white middle class: while this news sounds outrageous to you, as offended as your sensibilities have become, they happen for a reason. At the risk of de-sensationalizing a story, a reader’s deeper comprehension and understanding of these reasons is a gateway to accepting another culture — and thus coming off that high moral ground from which a smug, accusatory finger can be wagged. 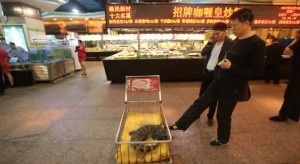 Animal cruelty has been all over Chinese news lately, but when people read about the atrocities, they don’t want their indignation to be supplemented with understanding and therefore negated. Anger is visceral, and it’s easy; taking a nuanced look at the values of another culture also makes it difficult for one to justify his or her own cultural shortcomings.

Many Western readers don’t want to hear about the Chinese worldview in which man occupies the balance between heaven and earth and of which everything has a rightful place in the universe – whereby animals of all kind are relegated to a secondary plane. Man’s role in the universe is so established that it was a (god among) man, Houyi, who tamed the heavens by shooting down all but one of the seven suns that scorched the earth, thus making it suitable for humans to cultivate and thrive.

Neither are Western readers treated to the perspective that the Chinese worldview is still by and large the same as when China was under feudalism hundreds of years ago; that the burgeoning middle class of the modern Chinese society did not exist back then, and so now strain the environment and its resources to the breaking point. To put it in a Chris Rock-style sound bite, there are at present too many rich people in China. (What’s a brother got to do to make some money around here?) 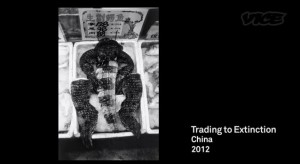 It’s almost a shame that Patrick Brown made a great documentary to go along with his condescension. But while he was quick to judge the Chinese for being “naive” and “greedy,” he also introduces a bit of cultural background to help viewers understand why Chinese consume shark fin soup:

And yet, he remains more critical of Chinese merchants in the illegal animal trade than of Burmese poachers, of whom he says, “This is a way of life for them.”

Listen, Patrick Brown: this is a way of life for some Chinese as well. It doesn’t mean it’s right – it just means that the culture here deserves to be equally acknowledged before it is so easily dismissed and condemned. Furthermore, this means that for real change to happen, the entire landscape of Chinese culture must change to allow for a worldview that can see past its current horizons.

Thousands of years ago, the ongoing Chinese preoccupation with longevity led to an interest in attaining immortality; the upshot of this being kings would eat mercury that was erroneously thought of as “immorality pills”… and die. Well, that changed. Chinese culture does change, but it won’t do so to appease the self-righteous criticism of everyone else.

terroir lives in China and blogs at Sinopathic.

30 Responses to “On China’s Illegal Wildlife Trade, Ethnocentrism, And Culture”